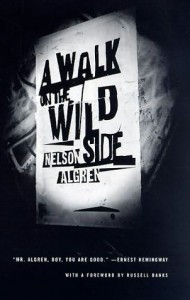 Read ‘A Walk On The Wild Side’ by Nelson Algren. The main character, Dove Findhorn, Texas son of an alcoholic preacher, is initially a bit of a greenhorn and too honest for his own good.

“My pappy was a preacher of sorts,” he says. “The sort to make you throw your Bible away.”

Dove loses his virginity to a much older woman, Terasina Vidavarri, whose thoughts on love are: “It is lucky to love any time, for then you have someone to live for… but if you are not in love that is lucky also. Because then you have no problem.”

Dove leaves his small town for New Orleans at the height of the depression, becomes a ‘salesman’ becomes a stud in a brothel and is later imprisoned. As a result of growing poverty the pimps discover that they have “more girls than beds to put them on.” A variety of sad characters pervade the book and some of the scenes in the brothel are both funny and sad.

Algren observes about human nature: “Although Prohibition was good as done, habits it had formed in those who had had their living off it for years could not be changed overnight. Every self-respecting speak-easy devised its own secret knock, peep-hole and password. Buyers wanted more than to walk through an open door, they wished to be admitted to a mystery. More, they wished to belong to a mystery.”

The novel is dark, disturbing, sad and tragic. Algren’s asides are scathing of the system: “Self-reliance for the penniless and government help to the rich, the Old Guard was in again… It was all right to take a slug of whiskey from your own flask in a taxi, but forbidden on a trolley-car. That didn’t help those who rode trolley-cars. You couldn’t carry liquor down the street, but if you owned a car you just bypassed that. For every statute they had a little loophole – that by coincidence fitted their own figures as if measured for them. Those who had no hand in writing statutes – panders and madams and such as that –  had a harder time squeezing through… when it’s all bought and paid for then there’s always one thing sure: it’s some Do-right Daddy-O running the whole show…

“For a Do-Right Daddy is right fond of money and still he don’t hate fun…Later he had to be purged of guilt so he could sleep with his wife again. That was where the pulpit came in. There had to be something official like that to put the onus on the women. The preachers, reformers, priests and such did this work well. Some girls were just naturally bad, they explained. Others were made bad by bad men. In no case was it ever the fault of anyone who profited by the shows. Daddy, you can go home again…

“The girls themselves read of the latest crusade, but their eyes skimmed idly over the print. When the last sermon was preached, the last editorial written and the last raid done, then those who had preached, written and raided would be coming down to see them for a bit of fun again.

“That was the ancestral treachery no one would admit.”

In jail Dove is advised by fellow prisoner Murphy (‘William Makepeace Murphy’, ‘a sort of Kangaroo Public Defender’) who tells him that “it’s always easier to convict a man of something he didn’t do than it is to prove that what he actually was doing was a crime.” And he goes on: “Never play cards with a man called Doc. Never eat at a place called Mom’s. Never sleep with a woman whose troubles are worse than your own. Never let anybody talk you into shaking another man’s jolt. And never you cop another man’s plea…

“Life is hard by the yard, son. But you don’t have to do it by the yard. By the inch it’s a cinch. And money can’t buy everything. For example: poverty.”

The ending is very sad. Dove returns home – no longer the man who set out. But he still thinks to himself: “If God made anything better than a girl, He sure kept it to himself.”