Finished No-No Boy by John Okada who died in obscurity aged 47 in 1970 believing that Asian America had rejected his work. 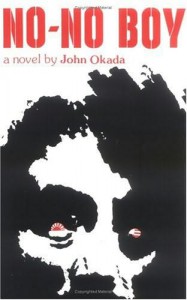 This was his only published novel. When no one showed any interest in him his wife burnt the remainder of his writings.

The novel, which was published in 1957 and had gone practically unnoticed, concerns 25-year-old Ichiro, a Japanese-American from Seattle, who has just been released after spending two years in a US internment camp, followed by two years in prison for refusing the draft.

Americans generally despise and suspect him but nor does he receive sympathy from many of his fellow Japanese. Ichiro’s younger brother, to overcome the shame he  feels, joins the army even though war is over.

Germans and Italians living in the US were not interned even though their countries were at war with the USA. However, the Japanese community, over 100,000 people, were interned for the duration of the war, following the attack on Pearl Harbour in 1941. Even though I was aware of this, it really took a novel to bring the force of what happened home to me. And, of course, this is why the novel creates an empathy which cannot be realized in text or history books. I always remember Henry Miller’s description of the frisson he experienced when as a child he started to read fiction and discovered character: ‘They were alive and they spoke to me!’

Ichiro struggles with his identity, who he is, where he fits in in the world, what his nationality is, and he rails against his delusional mother, a Japanese zealot, who despises the country she came to in order to enrich the family before returning to Japan. Ichiro is, indeed, caught in a metaphorical no-man’s land. His mother actually believes that Japan has won the war but that American radio and newspapers are holding back the bad news from the whites and are disseminating propaganda by claiming the opposite. Scenes of devastation and defeat have been staged to fool people and she is waiting on the emperor sending ships from Japan to bring them ‘home’.

One of the best passages is the interior monologue of Ichiro as he looks at his mother and thinks back to how it was before the war: “…we were Japanese with Japanese feelings and Japanese pride and Japanese thoughts because it was all right then to be Japanese and feel and think all the things that Japanese do even if we lived in America. Then there came a time when I was only half Japanese because one is not born in America and raised in America and taught in America and one does not speak and swear and drink and smoke and play and fight and see and hear in America among Americans in American streets and houses without becoming American and loving it. But I do not love enough, for you were still half my mother and I was thereby still half Japanese and when the war came and they told me to fight for America, I was not strong enough to fight you and I was not strong enough to fight the bitterness which made the half of me which was you bigger than the half of me which was America and really the whole of me that I could not see or feel. Now that I know the truth when it is too late and the half of me which was you is no longer there, I am only half of me and the half that remains is American by law because the government was wise and strong enough to know why it was that I could not fight for America and did not strip me of my birthright. But it is not enough to be American only in the eyes of the law and it is not enough to be only half an American and know that it is an empty half. I am not your son and I am not Japanese and I am not American.’

In the 1980s a US commission report, titled ‘Personal Justice Denied’, followed by legislation, declared that there had been little evidence of Japanese disloyalty and said that the actions had been based on ‘race prejudice, war  hysteria and a failure of political leadership’. Reparations were paid to the survivors and their heirs.