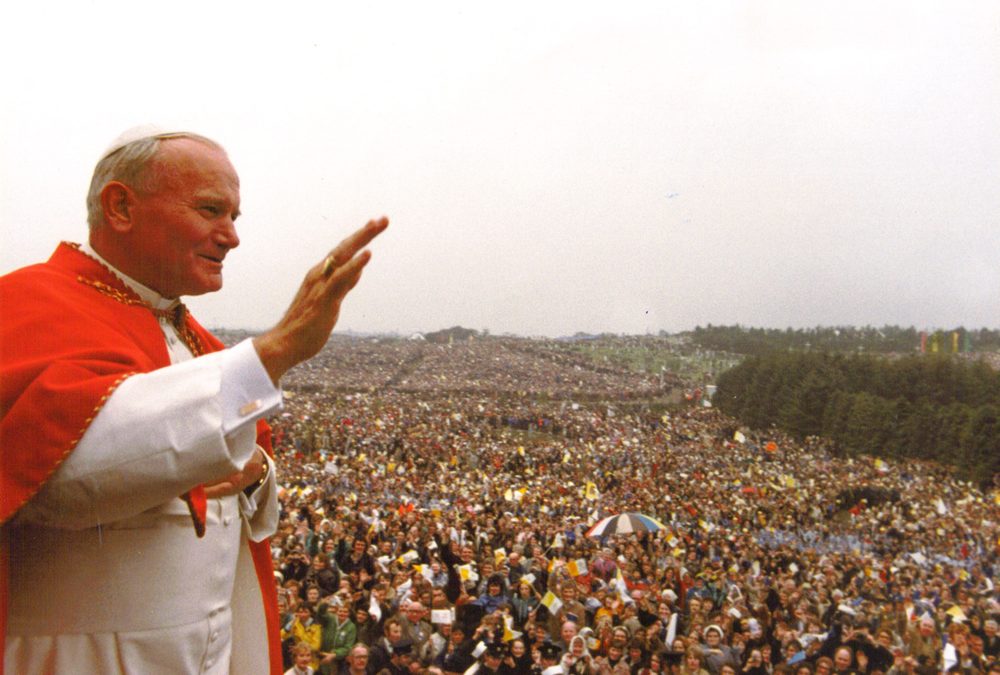 In 2004 I wrote a chapter for a book by Liberties Press, 3 Days in September: When the Pope Came to Ireland in which I was scathing of John Paul II and the Irish Catholic hierarchy.

Forty years later, and as the Republic of Ireland prepares for the visit of Pope Francis, it is the Catholic Church which is on the defensive over the widespread clerical sexual abuse of children and cover-ups. Nevertheless, the Catholic faithful are entitled to celebrate a visit by their pontiff, and I’ve no doubt they will.

But this is what I wrote fourteen years ago, about the visit by Pope John Paul II almost forty years ago.

The loyalist prisoners in Crumlin Road Jail cheered and whooped with joy and we were convinced that a Catholic had probably been killed overnight. We had no radio in our cell but quickly learnt that the news had announced the death of Pope John Paul who had been Pope for just thirty-three days.

Various historical and political repercussions have been attributed to John Paul II’s papacy, not least that his visit to his homeland, Poland, in 1979, when millions turned out to hear him and got a sense of their real strength, provided the impetus to the Solidarity trade union movement and the eventual downfall of communism.

That same year Cardinal O Fiaich announced that the Pope would be visiting Ireland from Saturday 29 September until Monday 1 October. The Holy See said that the various details of the visit were yet to be determined and there was great speculation about the reaction of unionists and possible disturbances if the Pope came North. For northern nationalists, who felt deserted and beleaguered, it would have been spiritually galvanising and on a par with John Paul’s visit to the beleaguered Poles under communist rule.

At the time I was firmly convinced that neither the British nor Irish governments, nor sections of the Catholic hierarchy, wanted him to visit the North. Firstly, this was a state whose proud badge was, ‘No Pope Here’. A visit would have presented a security nightmare given the likelihood of Paisley-led protests (Paisley had only recently topped the poll in the first European elections), and the possibility of riots, or worse. Loyalist protestors would have exposed themselves as narrow-minded bigots at a time when the thrust of both British and Irish government propaganda was to hold the Republican Movement responsible for all violence.

Were the Pope to have stood on the soil of the six counties how could he have remained silent about the reality of life there? On the one hand, he could certainly have spoken about the ferocity of the IRA campaign. But, on the other hand, he would have had to address the violence of the state and thus embarrass the British government. He would have had to speak about the torture of those held in interrogation centres; the sectarian loyalist assassination campaign against Catholics for being Catholic as well as nationalist; the beatings in the H-Blocks and about Armagh prison where women were locked up 24 hours a day, deprived of exercise, visits, letters, toilets.

Even Cardinal O Fiaich had described the H-Blocks as “one of the great obstacles to peace in our community.”

On August 27th an IRA bomb killed Lord Mountbatten and three others in Sligo Bay and a few hours later the IRA killed eighteen British soldiers in two landmine explosions near Warrenpoint. Even though Lord Mountbatten was killed by the IRA in the South it was announced that the Pope would not now be visiting the North because of “the upsurge in IRA attacks”. A northern visit which should have been undertaken for pastoral reasons was cancelled for political reasons.

Two weeks later there was speculation from sources in Rome that the Pope would make “a major speech on terrorism and injustice.” Closer to home Bishop Cahal Daly said that “the Pope may ask the IRA to put away its guns”. It was easy to see what way the wind was blowing.

There was massive disappointment in the North among the faithful. But people – including many republican supporters – began frantically raising funds and organising buses to go to Drogheda to hear the Pope. I was amazed and a bit disturbed at the zealotry. Perhaps if I had been the Catholic I once was I would have been able to empathise but I saw only the politics of this visit and expected the play of propaganda and the same things we had been used to hearing before. I remember how deserted our streets were the day he came to Drogheda.

I listened to his speech on television.

Pope John Paul II on his knees begged republicans “to turn away from the paths of violence and to return to the ways of peace. You may claim to seek justice,” he told us. “I, too, believe in justice, and seek justice… Further violence in Ireland will only drag down to ruin the land you claim to love and the values you claim to cherish.” 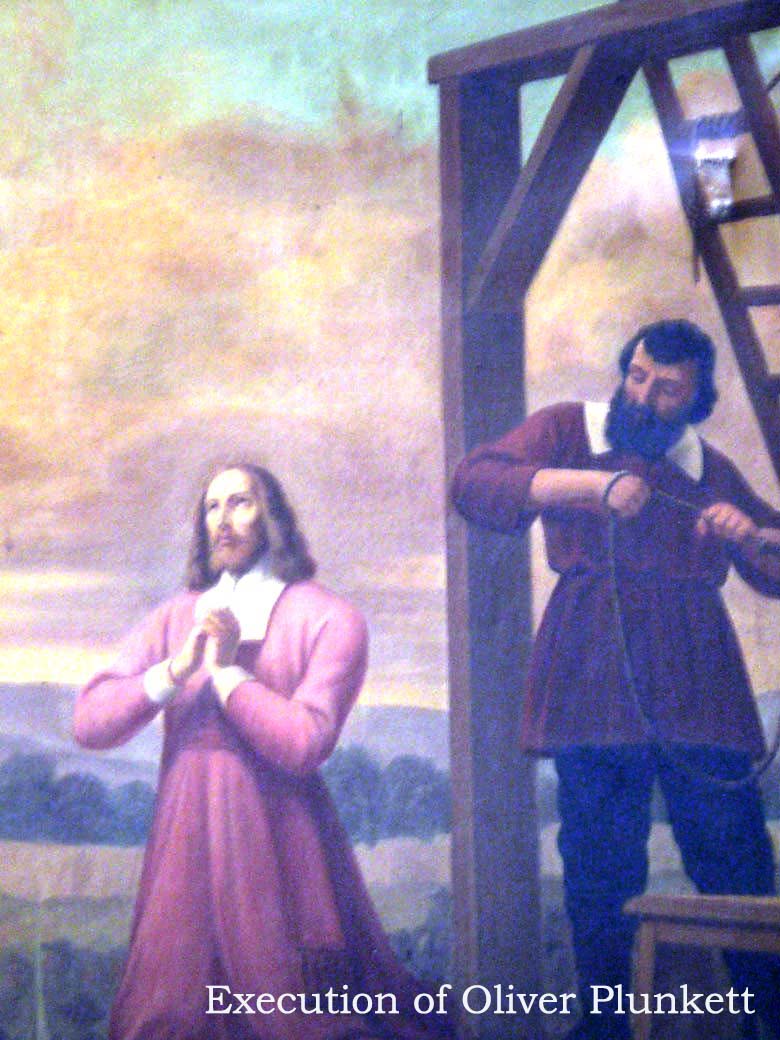 I waited for some analysis – however, superficial – of the causes of violence, about the inequalities caused by partition. He referred to Oliver Plunkett’s head but not to the people who cut if off.

He addressed the politicians. He started off with a token pretence to equivalence of treatment: “To all who bear political responsibility for the affairs of Ireland, I want to speak with the same urgency and intensity with which I have spoken to the men of violence.” But it was only advice he wanted to give them: “Do not cause, or condone, or tolerate, conditions which give excuse, or pretext, to men of violence.”

Bishop Cahal Daly’s fingerprints were all over the speech and an opportunity was squandered to put pressure on the British government to resolve the prison crises and encourage republicans to view an alternative to armed struggle.

In June 1981, after the deaths of the first four hunger strikers, Cardinal O’Fiaich went to Margaret Thatcher and appealed to her to make some changes in the prison regime to resolve the hunger strike. She said it would be wrong to give any concessions to the prisoners and fulsomely quoted the Pope’s 1979 speech on ‘the men of violence’ to justify her position. Subsequently, British governments were to quote Cardinal Cahal Daly’s stance in refusing to meet with the Sinn Fein President and MP for West Belfast, Gerry Adams, as part justification for their refusal to talk to Sinn Fein.

‘Men of violence’ was a phrase coined by Brian Faulkner when he introduced internment in 1971. After direct rule in 1972 it was subsequently used extensively by British secretaries of state and prime ministers. It was a phrase that had pro-British and anti-republican connotations. By no stretch of the imagination was the Pope’s use of this phrase simple naivety or coincidental.

And so, despite the Falls Curfew, internment, and Bloody Sunday the British men of violence were allowed off the hook, and were not asked to account for the children, women and men they had killed, for the prisoners they had tortured. Papal excoriation was for one side only, the weakest side, the oppressed.

Yet, an obvious disparity between the Pope’s criticism of the IRA and the reality of the wider nature of the conflict came at the youth Mass on the Sunday.

Two teenage victims of British and loyalist violence were introduced to the Pope. He warmly greeted 19-year-old Richard Moore, who was blinded when he was eleven by a British army rubber bullet, and 16-year-old Damien Irwin who lost a leg when loyalists bombed the route of an Easter parade in Belfast in 1977. But their details and the causes of their suffering were never included in any speeches the Pope made because to have done so would have been to raise questions about the nature of the conflict and why he had only condemned one side.

John Paul II also urged adherence to traditional Catholic moral values and denounced abortion, divorce, contraception, sexual promiscuity and drugs – thus calling into line the changing and changed morality of most Irish Catholics. However, it was typically his denunciation of the armed struggle which was given most prominence. And so we had discriminating editorials like that in the Irish Times which called on the IRA to say, ‘The Pope was right, there is another way’, but not making the same call to the 400,000 Irish women on the pill.

Two days after the Pope left Ireland loyalist gunmen burst into the home of 42-year-old Sadie Lamour, just off the Falls Road, around tea-time and shot her twice. Her sister and her 78-year-old mother were also fired on but escaped injury.

Sadie Lamour died fifteen minutes later and when her death was announced on the radio loyalist prisoners in Crumlin Road jail cheered and whooped with joy.