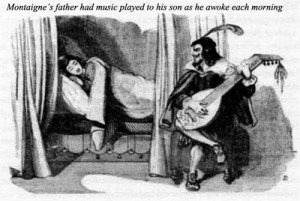 Here are my notes from Sarah Bakewell’s book, mostly in her writing. Though I thought she was a bit repetitive she still brings out some interesting points and observations.

Among the readers to be fascinated by Montaigne’s way of depicting the flux of his experience was one of the great pioneers of ‘stream of consciousness’ fiction in the early twentieth century, Virginia Woolf. Her own purpose in her art was to immerse herself in the mental river and follow wherever it led.

During the salt tax riots, Montaigne, then fifteen witnessed the killing of Moneins. A scene he never forgot. It raised in his mind, perhaps for the first time, a question that would haunt the entire Essays  in varying guises: whether it was better to win an enemy’s respect by an open display of defiance, or to throw yourself on  his mercy and hope to win him over by submission or an appeal to his better self.

The nineteenth century psychologist Dugald Stewart speculated that Montaigne’s lack of control of his memory made him better at such tasks. Montaigne was attuned to the kind of ‘involuntary’ memory that would one day fascinate Proust: those blasts from the past that irrupt unexpectedly into the present, perhaps in response to a long-forgotten taste or smell.

‘Forget much of what you learn’ and ‘Be slow-witted’ became two of Montaigne’s best answers to the question of how to live.

The conflict between French Catholics and Protestants and the outbreaks of fighting were often referred to by Montaigne and his contemporaries as ‘troubles’.

His friend La Boétie wrote a treatise, On Voluntary Servitude. The subject is the ease with which, throughout history, tyrants have dominated the masses, even though their power would evaporate instantly if those masses withdrew their support. There is no need for a revolution: the people need only stop co-operating, and supplying armies of slaves and sycophants to prop the tyrant up.

Montaigne had a visceral rapport with others. When speaking to the Brazilian Indians in Rouen, he was struck by how they spoke of men as halves of one another, wondering at the sight of rich Frenchmen gorging themselves while their ‘other halves’ starved on their doorsteps. For Montaigne, all humans share an element of their being, and so do all other living things. ‘It is one and the same nature that rolls its course.’ Even if animals were less similar to us than they are, we would still owe them a duty of fellow-feeling, simply because they are alive.

Alongside the wish to be happy, emotionally at peace and in full command of one’s faculties, something else drives people periodically to smash their achievements to pieces. It is what Freud called the thanatos principle: the drive towards death and chaos. The twentieth -century author Rebecca West described it thus: ‘Only part of us is sane: only part of us loves pleasure and the longer day of happiness, wants to live to our nineties and die in peace, in a house that we built, that shall shelter those who come after us. The other half of us is nearly mad. It prefers the disagreeable to the agreeable, loves pain and its darker night despair, and wants to die in a catastrophe that will set back life to its beginnings and leave nothing of our house save its blackened foundations.’

By writing so openly about his everyday observations and inner life, Montaigne was breaking a taboo. You were not supposed to record yourself in a book, only your great deeds, if you had any. The few Renaissance autobiographies so far written, such as Benvenuto Cellini’s Vita sua and Girolamo Cardano’s  De vita propria, had been left unpublished largely for this reason. St Augustine  had written about himself, but as a spiritual exercise and to document his search for God, not to celebrate the wonders of being Augustine… Only with the coming of Romanticism was Montaigne’s openness about himself not merely appreciated, but loved.