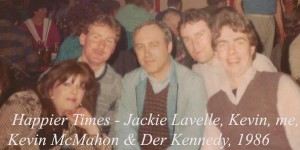 Around about this time in 1988 I was in Milltown Cemetery with several thousand people at the funerals of Dan McCann, Sean Savage and Mairead Farrell, IRA Volunteers who had been killed by the SAS in Gibraltar ten days earlier.

Given the large number of relatives at the graveside, I didn’t go into the Republican Plot but stood at the hearses with the journalist Mary Holland and veteran republican Richard Behal. I had seen and spoken to my friend Kevin Brady earlier, around midnight, when we were waiting at Kennedy Way for the arrival of the bodies from Dublin airport but the cortege had been hijacked on the M1 motorway by the RUC who forced the drivers of the hearses to follow them and take the coffins directly to the homes of the three Volunteers and deny us paying our respects.

On the morning of March 16th, to our pleasant surprise, the RUC and the British army were nowhere to be seen. They had completely withdrawn. It seemed as if they had now ended their five-year-old policy of attacking IRA funerals and had pulled back to allow us to bury our dead in peace and with dignity. 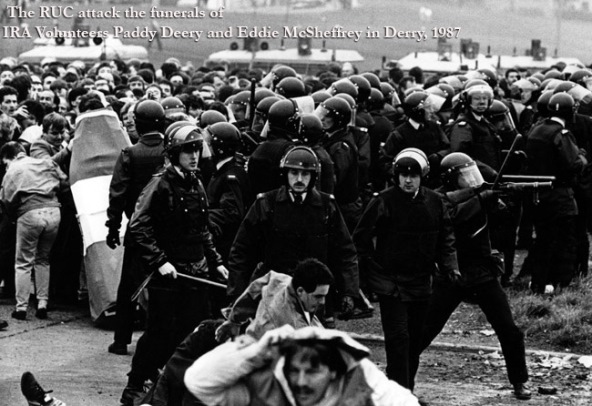 As the coffins were lowered into the ground and Gerry Adams was just about to begin his oration, the first hand grenade exploded not far from the hearses. We immediately dived to the ground and debris and soil flew through the air. There was another explosion and pandemonium broke out. Initially, I thought we were coming under mortar fire but then there was the sound of low velocity gunshots. I stood up and could see a crowd of young people chasing someone who was heading in the direction of the M1. Alan Rusbridger, later editor of The Guardian, would write how a man told him to keep his head down before he leaped over the headstone Rusbridger was hiding behind, and began pursuing the attacker.

That man was Martin McGuinness.

People were screaming, the wounded were lying all around. A St John’s ambulance, I think, was at hand and were administering medical help to those injured.

An angry crowd had caught a man who they thought was with the gunman who was now escaping. I ran over and could see that he was a journalist and told them to let him go, that I knew him. I am not sure – but I think he might have been Noel Dornan who went on to become the editor of the Irish News but was then working for the Belfast Telegraph.

There were a couple of other explosions down on the Bog Meadows and more gunshots.

A few hours later I received a call from Flair Campbell who had gone to the morgue with Brid Wiggins and he told me that Brid (Kevin’s sister) and he had just identified one of the three people killed as Kevin, Kevin Brady, who had been mortally wounded when he challenged Michael Stone during the attack.