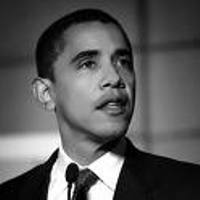 In 2004 I wrote for the Andersonstown News and said about Barack Obama: “as a potential Presidential candidate many years from now he is streets ahead of Hilary Clinton.” I called the piece, ‘A Politician to Watch’. Maybe now I’ll get a visa to enter the USA and promote my books!

A Politician To Watch

“Ladies and gentlemen, we have a President who was voted into office by inbred, hillbilly, Bible-thumping, ignoramous hicks. We just happen to live in a country with 58 million of them. That’s why the rest of the world is so confused by us…”

So wrote a despairing North American on a bulletin board during the week. But, amid the depression, the dark, the gloom, the probability of ‘Four More Wars’ resulting from the victory of George Bush, there was some measure of relief in the election of another politician, Barack Obama.

Forty-three-year-old Obama made history as only the third African-American to be elected to the US Senate in the past 125 years. He will be the only African-American in the 100-member Senate and although the Republican majority there and in the House of Representatives will be able to effectively block progressive legislation they won’t be able to silence Obama’s remarkable oratory. He is a mesmerising speaker, confident, radical (relative to US politics, of course) and as a potential Presidential candidate many years from now he is streets ahead of Hilary Clinton.

Obama’s father, who herded goats, came from Nyangoma-Kogelo, a Kenyan village of several hundred. Obama’s grandfather was a cook, a domestic servant to the British, whose own father had become a Muslim convert. Barack Obama himself is a Christian. In the 1950s Obama’s father won a scholarship to a US university, left Kenya, qualified as an economist and married a woman from Kansas. They gave their son an African name, Barack, which means ‘blessed’.

After young Barack graduated (around the time we here in Ireland were going through the period of the hunger strikes) he worked as a community organiser in the toughest and most deprived parts of Chicago. He returned to university to study law and afterwards worked as a civil rights lawyer fighting employment discrimination cases in federal and state courts. He then successfully stood for the Illinois Senate and shone as a defender of the poor on issues such as education, day-care facilities, health coverage (including increased funding for AIDS prevention), investment in depressed areas and reform of the death penalty system.

It was his powerful address to the Democratic National Convention in July that brought him national and international attention as he wooed the audience with the story of his own life and his belief in equality and civil liberty.

“If there is a child on the south side of Chicago who can’t read, that matters to me, even if it’s not my child. If there’s a senior citizen somewhere who can’t pay for their prescription drugs, and has to choose between medicine and the rent, that makes my life poorer, even if it’s not my grandparent. If there’s an Arab American family being rounded up without benefit of an attorney or due process, that threatens my civil liberties.

“It is that fundamental belief – I am my brother’s keeper, I am my sister’s keeper – that makes this country work. It’s what allows us to pursue our individual dreams and yet still come together as one American family.”

He attacked the divisive use of faith “as a wedge to divide us”. He said that “in a dangerous world, war must be an option sometimes, but should never be the first option.”

Last week, when news of his election to the Senate reached the village of Nyangoma-Kogelo, Obama’s 82-year-old grandmother, a devout Muslim, declared, “Praise be to Allah!” President Kibaki of Kenya sent him a message of congratulation which said, “You have proved to be a role model not only for the American youth, but the many young people in Kenya and indeed in Africa.”

In Illinois 70% of whites and more than 90% of African-Americans voted for him. In his victory speech he reminded supporters of what the sceptics had said, that “there was no possibility that someone who looked like me could ever aspire to the United States Senate… someone named Barack Obama could never hope to win an election – and yet here we stand!”

Obama has that common touch that many politicians lack. But his real gift is to explain an idea or a passion or a conviction not through ideology or theory but by making it flesh and blood. He has an ability to tell interesting stories such as the one about the woman he met while canvassing who promised him her vote.

“Finally, she saw hope breaking through the horizon and the Civil Rights Movement. And women who were willing to walk instead of riding the bus after a long day’s work doing somebody else’s laundry and looking after somebody else’s children. And she saw young people of every race and every creed take a bus down to Mississippi and Alabama to register voters and some of them never coming back. And she saw four little girls die in a Sunday school and catalyze a nation…

“She saw people lining up to vote for the first time and she was among those voters and she never forgot it. And she kept on voting each and every election… thinking that there was a better future ahead despite her trials, despite her tribulations, continually believing in this nation and its possibilities. Margaret Lewis believed. And she still believes at the age of 104 that her voice matters, that her life counts, that her story is sacred…”

Yes, Barack Obama, a name, a politician, to watch.