One City, One Book

Whiterock Road Library last night. It was great listening to three writers and a critic discuss Belfast city and its environs as depicted in their books and those of others. ‘One City, One Book 2013’ is a series of readings, discussions, interviews and talks running throughout May organised by the Arts Council. Damian Smyth, Head of Literature at the Arts Council, introduced the event and handed over to C.L. Dallat, the Ballycastle-born poet, musician and critic, who chaired the panel discussion.

Of the three writers – David Park, Colin Bateman and Lucy Caldwell – I am most familiar with the work of Park and have reviewed several of his novels, the last being The Truth Commissioner which I wrote about in 2009 in the scholarly journal of AEDEI, the Spanish Association for Irish Studies.

Whiterock Library is a great venue and the staff put on quite a spread for those who had travelled through such temperamental weather.

10th May. Was interviewed by Ken Sweeney, entertainment editor of the Herald, rejecting, in my opinion, the claim in a BBC documentary ‘Dave Allen: God’s Own Comedian’ that he received death threats from the IRA at the height of the Troubles. I recalled that when I was in Long Kesh in the early 1970s we prisoners thought he was brilliant – he was subversive, anti-clerical and anti-establishment. I told Ken Sweeney that I was such a fan of Allen that I mentioned him in the prologue to my 2002 memoir, All The Dead Voices. It is so easy for any crank or someone with a grudge to make an anonymous threatening call which decades later is then treated as fact. 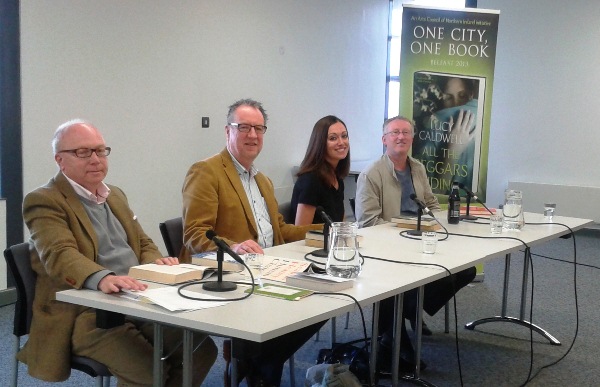