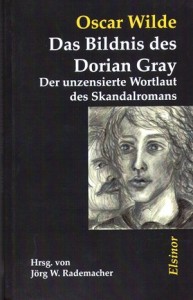 Dr Jörg Rademacher, the German translator of my novels, wrote a critical feature on Oscar Wilde as a follow-up to his 2011 translation of ‘Dorian Gray’ – ‘Das Bildinis des Dorian Gray’, published by Elsinor in Germany in 2012.

This feature, now in English, can be read here.

It deals with the decisions a translator must make when faced with variations on a particular text, how it was first produced and appeared and whether to question or honour the elisions the author made in the light of difficulties to do with his personal circumstances rather than revisions made to perfect the final work. It is a fascinating piece.