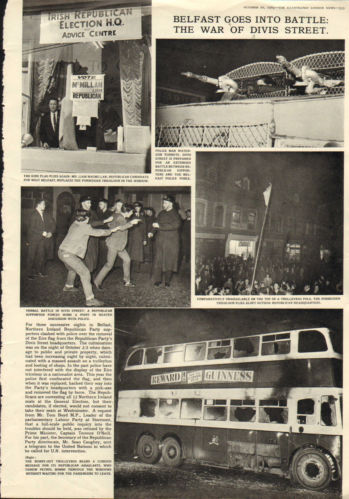 The avuncular, conciliatory image which Ian Paisley almost got away with promoting in his golden years and which deluded so many was undone within minutes of last night’s television documentary by Eamonn Mallie. Once again the ego and pompousness and bigotry – and cowardliness – was on full display. No sign of contrition, no acceptance of responsibility for provoking, stoking and feeding the conflict. Just the same old ego.

But what a mistake Paisley has made if he thought this would be perceived as his swansong. More of a vulturesong from the sectarian bigot of old.

I wrote a cynical piece about him in 2000, in the days when he was still opposed to power-sharing with republicans, the
‘Sinn Fein/IRA’ he set out to smash, a message whose subtext was adopted literally by loyalist paramilitaries. Here it is:

Q. In the penal days Popish clergy were banished from Ireland. Informers could get a bounty of £50 per Catholic bishop. Do you think this was a good going-rate?
Q. I know you are a strict Sabbatarian but have you ever had a wee swing on a Sunday or accidentally caught yourself whistling? Do you always wait until after midnight before you read the Sunday newspapers and, if so, who goes out and buys them at that hour? If must be handy having a corner shop open all the time.
Q. Have you never taken a drink – even a wee sniff?
Q. Have you ever cha-chaad, tangoed, jived or twisted? Ever sun-bathed in your bathing costume on the beach?
Q. Who’s your favourite Beatle? Or are you a Stones man?
Q. Do you have an RTE aerial?

Interlude I
June 1959. A rally at the corner of Percy Street and the lower Shankill. Ian preaches Christ’s message: “You people of the Shankill Road, what’s wrong with you? Number 425 Shankill Road – do you know who lives there? Pope’s men, that’s who! Fortes ice-cream shop, Italian Papists on the Shankill Road! How about 56 Aden Street? For 97 years a Protestant lived in that house and now there’s a Papisher in it. Crimea Street, number 38! Twenty five years that house has been up, 24 years a Protestant lived there but there’s a Papisher there now.”

Q. You once claimed that Catholics worshipped gigantic phalluses. Do you still believe this?
Q. Did you ever get taking that oul Tricolour out of that window?
Q. Are the collections in the Martyrs Memorial Church silent?
Q. How much are you worth?

Interlude II
1966. UVF man Hugh McClean has just been charged with murdering 18-year-old Beechmount youth, Peter Ward, outside the Malvern Arms. He says: “I am terribly sorry I ever heard of that man Paisley or decided to follow him. I am definitely ashamed of myself to be in such a position.”

Q. Were you a wee bit hurt by McClean’s ingratitude?
Q. When you yourself were a jailbird did you wear the prison uniform?
Q. Were you a good cook in the prison kitchen?
Q. Was the exam for the Doctorate hard?
Q. Does the name Jimmy Dempsey ring a bell? In September 1969 you addressed your supporters in the Village area who later tried several times to march up Broadway and take down a barricade at Iveagh Street. Jimmy Dempsey dropped dead during one of these attempted invasions of his district.
Q. You take the Bible literally as the word of God and believe that we are all descended from Adam and Eve. Does that mean you are related to Gerry Adams – or, worse still, Pope John Paul II?
Q. Were you actually waving a shotgun licence on that Antrim hillside in the middle of the night all those years ago, or were you sneezing into a hankie?
Q. What ever happened to your wee Ulster Resistance red beret?
Q. Where’d you and Willie McCrea get the accents?
Q. During the loyalist strike of May 1977, organised by the UDA and yourself, Kenny McClinton shot dead Citybus driver Harry Bradshaw because he didn’t join the stoppage. How are things these days between you and Pastor Kenny?

Interlude III
Ballycastle, 12 July 1997. Ian addressing the Independent Orange Order: “I walked the Garvaghy Road and led a crowd of a thousand men without permission, up and down it, and they never fired a peanut at us. They came to their bedroom windows and they thought they were already in Purgatory by the look on their faces, they were so amazed that these men were up there, and there was enough of us to keep them in that order.”

Q. Was Peter’s mistake in Clontibret to lead a crowd of just 500 men? Why did you help Peter-the-Punt pay his £15,000 fine? Did you not want him to go to jail and become a member of the Felons Club?
Q. Were you ever in a fight?
Q. Do you use Brylcream?
Q. When you are making a serious point you close your eyes for several seconds as you speak. What is it you are seeing?
Q. Why did you give your old trench coat to Gerry Kelly?
Q. Was David Irvine ever in your parlour?
Q. Have UVF men ever seen the colour of your wallpaper?
Q. Do you love me?
Q. Why doesn’t Ian Jnr have a sense of humour?
Q. Is Rhonda still at the old crayons?
Q. Why do you think the IRA’s never shot you?
Q. Do you think they think you’re an oul eejit?