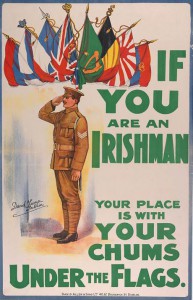 One hundred years ago Britain entered Britain and Ireland into World War I. Thousands of books have been written about that period. In 1996 I reviewed Myles Dungan’s Irish Voices from the Great War (which has recently been reissued) for the Sunday Tribune, and, later, in 1998, I reviewed his companion volume, They Shall Not Grow Old. Here they are:

Just as it is possible to admire the fortitude and heroism of the Protestant defenders during the Siege of Derry in 1689, and yet regret the political legacy of their victory, so too should nationalists and republicans feel able to acknowledge the selflessness and patriotism of those thousands of Irish men and women who participated in the First World War.

Prior to 1914 the regular British army had many Irish regiments. Service, like emigration, was a means of escape from hunger and unemployment. However, after September 1914 there was a huge influx from the Irish Volunteers when the leader of the Irish Parliamentary Party, John Redmond, made a recruiting speech in favour of the British army.

The Irish Volunteers, established to support Home Rule, then split. The minority saw England’s difficulty as Ireland’s opportunity. But most marched off to war, believing naively that by fighting, Ireland would get a better post-war deal. The loyalists believed the same and they were correct.

Myles Dungan tells the story of the first Irish Division, the 10th, and the 16th, raised from the Irish Volunteers, and reprises that of the 36th Division – the old UVF – drawing on the diaries, letters and oral accounts of those who took part. It is horrifying and poignant: most of the military battles were a waste and pointless.

Landing at Gallipoli in a boat with 32 men, only six of whom got out alive, a Sergeant McColgan said: “One fellow’s brains were shot into my mouth as I was shouting to them to jump for it.” On another boat, 149 out of 200 were killed outright. Private Timothy Buckley recalled: “I stood counting them as they were going through. It was then I thought of peaceful Macroom, and wondered if I should ever see it again.”

Of course, the slaughter wasn’t all one-sided. A Lieutenant Guy Nightingale wrote to his sister: “When dawn broke, we saw them in hundreds retiring and simply mowed them down. We took 300 prisoners and could have taken 3,000 but we preferred shooting them. All the streams were simply running blood and the heaps of dead were a grand sight.”

Almost 2,800 Irish men died at Gallipoli. When it was evacuated in December 1915 the Turks were still in possession.

Until I read this book I had only the vaguest comprehension of the extent of Irish involvement and the magnitude of the sacrifices. The Somme had been understandably appropriated and commemorated by the loyalists, and Suvla and Sudd-el-Bahr had reproachful connotations. (Indeed, the republican song ‘The Foggy Dew’ makes this very point, contrasting dying for Ireland in Ireland than for England in Gallipoli: “Twas better to die ’neath an Irish sky/Than at Suvla or Sudd-el-Bahr”.)

So although those names were familiar I had never heard of Guillemont or Ginchy or Messines or Salonika or the Third Battle of Gaza, the hundreds butchered here and there.

“Had nationalist Ireland taken a different political direction perhaps Gallipoli might occupy a place in the Irish psyche similar to that of the Australian,” observes Dungan.

But the Ireland to which the survivors returned was in chaos, nationalist passions having been fired by the 1916 Easter Rising, the executions of its leaders, the threat of conscription. Few wanted to know their story. Many ex-servicemen would subsequently be shot as spies. Some, like Tom Barry, took their military skills into the fledgling Irish Republican Army. And what could be more ironical than the case of two former servicemen, Dunne and Sullivan, one of whom was lame from a war wound? Acting under orders from Michael Collins they assassinated in London Sir Henry Wilson, former chief of the Imperial General Staff in 1921. Arrested on the spot, they were tried and convicted and hanged, having fought in two wars for the freedom of small nations.

This is a companion volume to Myles Dungan’s Irish Voices From the Great War and complements that anthology of tragedy with further stories of unromanticised life in the trenches, the experiences of PoWs, and an illuminating and critical look at the role of chaplins.

Incredibly, up to a quarter of a million Irishmen fought in the First World War. Dungan has already dealt fairly comprehensively with the loyalist 36th (Ulster) Division and here focuses more on Irish soldiers from the South. He has two objectives, both worthy. One, to record the sacrifice, sufferings and courage of these soldiers, the majority of whom believed they were advancing and securing Irish claims to Home Rule. The Act had been passed at Westminster but suspended until after the war. Two, to rectify the subsequent injustice the returnees experienced – non-recognition, public antipathy and animosity due to the political revolution (Easter 1916, Sinn Fein supplanting the Irish Parliamentary Party, the emergence of the IRA) that had taken place in their absence.

The World War I ‘veteran’, Dungan says, became indelibly associated with the other ‘veterans’ who made up the Tans and the Auxiliaries and who carried out atrocities. Commemoration and memory of the war became associated with support for the British administration in Ireland, just as in the North today the wearing of the Poppy is largely identified with the unionist cause.

He accuses subsequent generations and the state itself of ‘culpable neglect’. There is certainly a case to be answered and most people, I believe, would be interested in finding a way of embracing this part of our history. My Granda Morrison and my mother’s Uncle Paddy both took part. And just last year the West Belfast Festival sponsored a discussion around the controversial question, ‘’Twas better to die ’neath an Irish sky than at Suvla or Sed el Bahr’?  One of the guest speakers was Gordon Lucey of the Somme Association.

A problem arises, however, because the more rabid of the revisionists (for example, Kevin Myers) come to this subject with their own political agenda. In seeking to create a sense of public guilt they seek more than rehabilitation. By exploiting the war dead and war veterans, by making disparaging comparisons between the warfare and sacrifices of those Irish who fought against the British and those who fought with the British abroad, they seek to return to the days when Pearse and Connolly were spat on as they were marched through the streets of Dublin. In their view the IRA’s War of Independence should be rejected, its heroes tarnished (and in the process the cause of Irish reunification). The invective of the revisionists is deliberately aimed at making it difficult for those who do not share their political analysis to become embracive.

Dungan himself is not above exaggeration, linking the political defeat of Paddy Harte in his Donegal constituency (where he had been a TD for 36 years) with his wearing of a Poppy in Leinster House in 1996. I don’t think so, Myles.

The descriptions of the war are horrific and heart-breaking. One soldier, Wallace Lyon, was given the task of disposing of over 300 bodies after a gas attack: “They were in all sorts of tragic attitudes, some of them holding hands like children in the dark.” Another soldier, Patrick Downey, was sentenced to death for disobedience (he refused to put on his cap). On hearing of the verdict he allegedly laughed and shouted, ‘That is a good joke. You let me enlist and then bring me out here and shoot me.’ They shot him at dawn.

One of the most interesting chapters is The Foolish Dead, which deals with the soldier writers Tom Kettle (killed in September 1916), Francis Ledwidge (killed in July 1917), and Patrick Magill (author of ‘Children of the Dead End’, who died in the USA in 1940). Kettle was appalled by the actions of Pearse and Connolly, denouncing the Rising as madness. Yet after the murder of his brother-in-law, the pacifist Francis Sheehy-Skeffington, and the executions of the leaders, he knew his own position with the British Army at the Somme had lost its initial validity. Just before he was killed he wrote a sonnet for his little daughter. With poetry such as this as testimony, Kettle and his comrades will never be forgotten:

Know that we fools, now with the foolish dead,
Died not for flag, nor King, nor Emperor,
But for a dream, born in a herdsman’s shed,
And for the secret Scripture of the poor.