I wrote a feature on Eamon Mallie’s website in response to an article by the loyalist Jamie Bryson who came to prominence during ‘the flag protest’. Here it is: 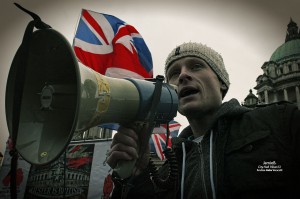 I was interested in Jamie Bryson’s recent feature, titled ‘Power-sharing, a matter of trust!’

Jamie speaks about “the dysfunctional nature of our power-sharing institutions” and that it is this mandatory power-sharing which leads to “mutual distrust”. This is to ignore several major facts, historical and contemporaneous. There is an abundance of quotes from the 1920s through to 1972 when Stormont was prorogued, speeches in Stormont or at the field on the Twelfth, where unionists boasted about not having a Catholic about the place.

“I recommended people not to employ Roman Catholics, who are 99% disloyal,” said Sir Basil Brooke, Prime Minister (1943-1963). “At a meeting in Derry to select candidates for the Corporation Mr. H. McLaughlin [Ulster Unionist Party, speaking in 1946] said that for the past forty-eight years since the foundation of his firm there had been only one Roman Catholic employed – and that was a case of mistaken identity.”

That’s, Jamie, why we needed mandatory and not voluntary fair employment legislation!

When I hear references to the dysfunctional nature of our power-sharing institutions, I think why stop there? Their ‘dysfunctionality’ is actually a product of the artificiality of the six-county state (based on a sectarian headcount, which is why Ulster’s Donegal, Cavan and Monaghan were excluded from the new state – too many Catholics!).

When I hear Jamie talk about the institutions as being “a perversion of democracy”, I think why stop there? Surely when a minority of people, the landed gentry and their officials, were ruling Ireland that was “a perversion of democracy”? Unionism had no problem with a united Ireland when it controlled the reins of power. Ulster unionism gathered apace when the extension of the franchise (that is an increase in democracy) in the late nineteenth century threatened its privileged position. And not only did it oppose majority rule in Ireland when that appeared to being achieved peacefully through the Home Rule Acts, but it threatened civil war, and established an illegal paramilitary army, the UVF, which threatened the will of the British parliament. That’s why I appreciate the irony of Jamie saying there must be no “threat of violence or coercion”. Ah, those change of rules! Those moveable goal posts!

Having said that, let me state my opposition to the armed actions of dissident republicans and my commitment to the use of peaceful means only to achieve my political aspirations.

The Republican Movement was repeatedly assured by successive British governments and sections of unionism that if the armed struggle was ended it would be free to agitate peacefully and through the ballot box for a united Ireland. But now that this is happening it suddenly becomes an attack on “unionist culture” and “our Britishness”. Ah, those change of rules! Those moveable goal posts!

The reason for power-sharing is because when the Ulster Unionist Party had exclusive power it abused it. In other words, because neither it nor the DUP which supplanted it could be trusted, the only form of government acceptable is mandatory power-sharing but one based on power being distributed among parties depending on their electoral strength.

Jamie wants to roll back mandatory coalition to voluntary coalition, which he says is acceptable to unionists. The voting arrangements in Belfast City Hall are along voluntary lines, yet when a voluntary coalition of Alliance, Sinn Féin and the SDLP, comprising a majority, voted to support the flying of the Union Flag on designated days, a wave of protest and violence was unleashed by loyalists demanding the flying of the flag 360 days a year. That’s very inclusive, very reassuring, commands a lot of trust! How does Jamie square that one?

The issue of trust for republicans is also one that goes to the heart of peace-making.

From prison I was in correspondence with the journalist David McKittrick discussing all these issues 25 years ago. David was arguing that the IRA campaign was futile whereas I was arguing that the IRA would not ceasefire unless there was the prospect of transforming the situation and creating real justice and lasting peace. I also said that the IRA would not do that in a vacuum and that, “Calling it off would certainly not lead to reconciliation or positive change in the unionist attitude, which would then be: ‘It was close, but we hung on and beat the bastards in the end.’”

And wasn’t there something of that premature triumphalism from certain loyalist paramilitaries in 1994, although there is none of that triumphalism, only complaint and grievance, today?

I also wrote: “When the time for talking does come and everybody’s talking, republicans will have to address themselves to realpolitik – to come to the crucial issue of the unionists, their identity, their rights, their security, their fears and the institutions they would be prepared to support. That is a huge subject and, obviously, one for negotiation.”

Back then, I was firmly of the opinion that “a six-county British state will always make me feel like the vanquished party”. But I swallowed my pride for the sake of peace and compromised to allow for the sensibilities of unionist people, what some choose to call “their Britishness”, and to trust that unionists were not out to wipe my eye or turn back the clock.

The fact that the state I now live in is not the state I grew up in and that so much has been transformed allows me to identify more closely with all the people here and not just nationalists.

Many unionists, former loyalist prisoners and former members of the RUC and British army have told me they also feel that way – that peace has liberated us from former fundamentalist attitudes.