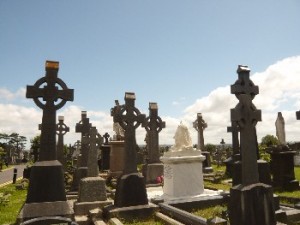 A few weeks ago Lara Marlowe in the Irish Times was reporting on the aftermath of the recent devastating earthquake in Haiti which killed upwards of 150,000 people. She wrote: “Before the earthquake, Haitian funerals were an occasion for celebration. Families splashed out tens of thousands of Haitian dollars on luxury caskets and new clothing for the departed.”

Whilst it might be considered to be highly respectful to honour your deceased loved ones in such a demonstrative way I am sure it placed a huge burden on Haitians who are amongst the poorest people in the Western Hemisphere. I suspect also that this pressure to compete is akin to the phenomenon of ‘keeping up with the Joneses’, which widely affects poor and working-class people.

There is an interesting story told by the German writer Goethe in his autobiography, which I have written about before, about his neighbour, Von Ochsenstein, a patrician who had not led a particularly remarkable life. In those days – late eighteenth century Europe – the custom (in a way similar to Haiti) was for great expense to be laid out for funerals which often crippled poor families. Von Ochenstein left behind directions that common working men should carry him to the grave, early in the morning, in perfect silence, and without an attendant or follower. Though a bit extreme, he made his point, about death being an equaliser, a leveller.

Goethe wrote: “the affair caused great excitement in the city, where they were accustomed to the most pompous funerals. All who discharged the customary offices on such occasions rose against the innovation. But the stout patrician found imitators in all classes, and, though such ceremonies were derisively called ex-burials, they came into fashion, to the advantages of many of the more poorly provided families…”

Prior to 1969, when a loved one passed away, one death notice in the ‘Irish News’ was adequate to inform all that person’s old friends and neighbours. And, yet, fast forward to today, and when someone dies it almost seems as if their worth is measured in the number of death notices that are placed in the local newspapers. Furthermore, this phenomenon (which I believe to be connected to the Troubles when neighbours in streets, friends and relatives, placed insertions after a murder or killing to show solidarity or outrage) appears mainly to be associated with working-class people. I never see that many death notices from middle-class people: one or two notices appear to be enough. Besides, ‘bad’ news travels fast, so even if no notice was placed you can be sure that the majority of a late one’s acquaintances would have been informed about his or her death.

The only real beneficiaries of the placing of multiple death notices, row upon row, are newspaper proprietors. I recently counted up the revenue of a well-known daily. The notices filled two or three pages (presumably, requiring one typesetter only), required little or no journalism (just a little subbing), no scanning of photographs or creative design, and was raking into its coffers about £40,000 per week.

I am leaving instructions behind that when I pass off this mortal coil that one death notice shall be sufficient – that is, if even then, I have a friend!