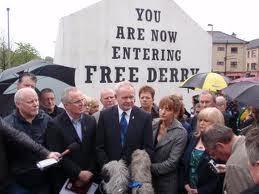 Wrote a feature for the Irish Times about the Presidential race in the south which was published yesterday, along with several other mainly anti-Martin McGuinness contributions. Here it is:

Pearse and Connolly woke up one Easter Morning and decided to seize the GPO. Young Michael Collins joined in. No one supported them because there were peaceful, constitutional options available to bring about reform, but the terrorists, through an illegal organisation, the IRA, beginning in 1919, and now led by Collins, began murdering fellow Irishmen and blowing up peacekeeping troops.

That is how history would be taught to our children if we were to use as a template the way many journalists and opponents of Martin McGuinness single out his membership of the IRA, devoid of placing it in the context of partition, 50 years of discrimination and humiliation of nationalists, and routine state violence – what Fine Gael’s Peter Barry described as “the nationalist nightmare”.

For the record, the first sectarian killings (of John Scullion and Peter Ward) were carried out by the Ulster Volunteer Force; the first bombings (in 1969), by loyalists; the first state killings (of Sammy Devenney, in front of his family; of nine-year-old Patrick Rooney, shot dead in his bed), by the Royal Ulster Constabulary; the first British soldier to die (Hugh McCabe, a Catholic, home on leave and defending Divis Flats) was killed by the RUC; and the first RUC officer to be killed (Constable William Arbuckle), by loyalists. None of the state killers were ever charged but were protected by the British government, as are all of their assassins to this day.

Let everyone tell the truth and then people can decide the morality or conduct of the protagonists, including the negligence of successive Irish governments which became complacent about partition and did little to address injustice towards nationalists.

Incidentally, although the Irish government established a Bureau of Military History to record the deeds of those who had fought the British, Éamon de Valera, Richard Mulcahy and Seán Lemass declined to contribute a record of their past, even 30 years after the War of Independence.

Martin McGuinness was in the IRA and never sought to distance himself from the IRA or from his responsibility as an Irish republican leader. What the other parties do not want to examine is the British contribution to the conflict – its killings, torture of prisoners, its collusion with loyalist paramilitaries, its cover-ups and refusal to tell the truth (especially in relation to the Dublin-Monaghan bombings) – because that then places McGuinness’s life in a context not dissimilar to those who historically resisted British rule.

McGuinness’s position in terms of responsibility is no different from those held up by Fine Gael and others as model patriots who were in the IRA during the War of Independence or on the Treaty side during the Civil War, when shocking deeds were carried out. Does Gay Mitchell forget having lavished praise on Michael Collins in 2006, while also suggesting the government should consider a role as joint president for the British monarch in a new all-Ireland state?

Fine Gael’s querying of McGuinness as an “appropriate candidate” is mere expediency. Fine Gael went into government with the former chief of staff of the IRA, Seán MacBride, in 1948. Fine Gael proposed for the presidency in 1945 and 1959 Seán Mac Eoin, who is reputed to have killed up to two dozen Royal Irish Constabulary men.

McGuinness has stood for election in the North, been elected as an MP and Member of the Legislative Assembly, worked for the peace process (including bringing lessons that he learned in Ireland to Iraq, the Basque country and Sri Lanka); worked for a ceasefire, IRA decommissioning and the devolution of justice and peace; and has been minister of education and deputy first minister with Ian Paisley and Peter Robinson. He has stood shoulder-to-shoulder with the Police Service of Northern Ireland after the killings of its officers, a stance for which his life has been threatened by dissidents.

He has represented the Executive on trade missions to the US and the EU, which has attracted millions of pounds in investment.

Fine Gael Ministers, including Enda Kenny, have sat with McGuinness on the North-South Ministerial Council for years without demur. No one in Fine Gael queried his worthiness until he decided to stand for the Irish presidency. Good enough for the unionists, but not for the good people of the Republic?

Where is the reconciliation and forgiveness that we in the North were exhorted to show at difficult times in the peace process?

This newspaper last Thursday published a story by Peter Murtagh of an account of his visit in 1986 to the home of Frank Hegarty, an IRA man/British informer, whom the IRA killed. Peter worked for the Guardian and claims that while interviewing the Hegarty family, two “heavies” arrived and ushered him out to the street where McGuinness was sitting in a car and effectively told him that the interview was over: “Ended by McGuinness and his two heavies.”

When asked, Peter told me he couldn’t remember why he didn’t write about the incident at the time. But he could remember the incident now! Ooom.

Many in the Republic appear not to have “moved on” and are still fighting the proverbial war. The freedoms that people enjoy were made possible because IRA volunteers sacrificed their lives during the independence struggle. It was a time of terrible war, similar to ours in the North, which thankfully is behind us, though selective accounts of death and tragedy are raked up every day by those cynically seeking electoral advantage, by those attempting to disguise their own shortcomings.