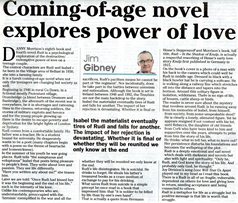 Two reviews of my new novel appeared on the same day. One by Jim Gibney in the Irish News and the other on the website of the writer, poet and documentary film maker Paul Larkin.

The Irish News has a firewall so I cannot link to the review but will publish it below.

Danny Morrison’s eighth book and fourth novel, ‘Rudi’, is a psychological exploration of the destructive/redemptive power of love on a teenage couple who are the central characters, Rudi and Isabel, he born in the Village area of Belfast in 1930, she into a farming family.

It is a harsh coming-of-age novel when not only the teenagers and their friends are changing but
society as well.

Beginning in 1946 in rural County Down in a fictional mostly Protestant village, Drumbridge (a
blend of Dromore and Banbridge), the aftermath of the recent war is everywhere, be it in
shortages and rationing, films in the cinema, returning soldiers, the stories of military exploits
and heroics, and for the young people growing up there is the desire to escape poverty and
deprivation for the bright lights of London or Sydney.

Rudi comes from a comfortable family. His father was a teacher. He is a student bound for
university. He desperately wants to be a poet (many chapters begin with a poem on the theme of
heartache and homesickness). In the summer of his youth he was going places. Rudi tells “the
sumptuous, voluptuous” Isabel that poets bring pleasure to people’s lives. They write about love
and passion. They see life differently.

“Have you written any about me?” she teases him.

Later we are told: “Once Rudi had kissed her it was the beginning and the end of his life,” such
is the intensity of his love.

Unlike his contemporaries and coevals who are, understandably, preoccupied with the ‘heroism’
exemplified in the war and all the sacrifices, Rudi’s pacifism means he cannot be part of ‘the
regiment’. Nor, incidentally, does he take sides in the battles between unionism and nationalism.
Although the book is set in Ireland between 1946 and 1992, the Troubles are not the main
backdrop to the story.

Isabel, the materialist, eventually tires of Rudi and falls for another. The impact of her rejection
is devastating. Whether it is final or whether they will be reunited we will only know at the end.
Rudi’s life disintegrates. He is suicidal. He drinks to forget. He steals his father’s treasured books
as a crass medium of exchange to pay for his drinking.

What saves Rudi from suicide is a simple precept he once read in a book that impressed him: that
“it is nobler and finer to be felled by life than by one’s own hand.”

That is actually a quote from Hermann Hesse’s ‘Steppenwolf’ and Morrison’s book, full title,
‘Rudi – In The Shadow of Knulp’, is actually a respectful reworking of Hesse’s early love story,
‘Knulp’, first published in Germany in 1915.

On the book’s cover is a photo of a man with his back to the camera, which could well be Rudi
in middle-age. Dressed in black with a black bowler hat he is carrying a suit case. He is walking
along a railway line which stretches off into the distance and tapers into the horizon. Around this
solitary figure is isolation, wilderness. There is no sign of life, of houses, cattle sheep or birds.

The reader is never sure about the mystery that revolves around Rudi: is he running away from
his memories of Isabel, from himself, from society, from some unspeakable deed?

He is clearly a lonely, alienated figure. Yet he appears resigned if not content with his lot, until
Rebecca, the daughter of old friends from Cork who have been kind to him and supportive over
the years, attempts to prise from him the story of his life.

He thinks: what to tell her, what to leave out? Her persistence disturbs his foundations and
becomes the wellspring of the plot.

‘Rudi’ is a deeply emotional and sad story which deals with darkness and secrets but also with
light and spirituality: “Only he, Rudi, and God knew the story of his life. And probably only
God, he thought.”

Joy Division’s song, “Love will tear us Apart,” played out in my head as I read this book.

There is a Rudi in us all: fragile, vulnerable, dependent on others for love and giving love in
return, needing acceptance and being connected to others.

Rudi is a metaphor for life as a struggle, but its positive message is that life is worth that
struggle.