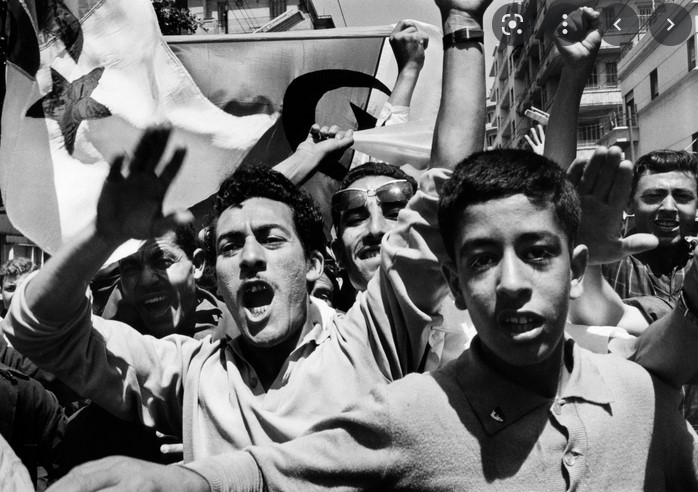 This week’s Andersonstown News reviews Patrick Anderson’s book on Ireland and Algeria* with its indepth account of the propaganda war during the conflict and which continues to this day, especially with the electoral rise of Sinn Fein. The book is reviewed by Roy Greenslade, himself a former journalist with The Guardian, one of the papers which Anderson places under the microscope to expose its hypocrisy and double standards.

This is, quite simply, an extraordinary book. It should be on the reading list of student journalists across the globe because it illustrates how the controversial ‘propaganda model’ proposed by Noam Chomsky and Edward Herman worked, and works, in reality.

Their contention that media acts on behalf of power is proven beyond doubt by Patrick Anderson’s meticulous examination of newspaper coverage devoted to two similar anti-colonial struggles, those in Ireland and in Algeria.

Rather than dealing with the political clientelism of Britain’s populist press, he chooses to concentrate his fire on two titles, renowned for their supposed independence and liberal ethos, The Guardian and The Observer. 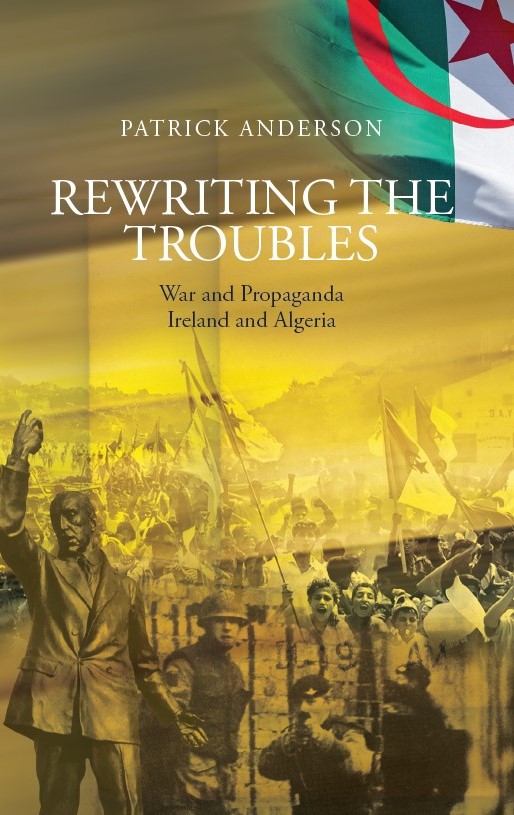 Before I go further, I need to record that I wrote for The Guardian for the best part of thirty years. But, crucially, my time there came long after the paper’s great crime against the people in the north of Ireland, which involved a persistent denial of the truth and a partiality bordering on racism.

During the period covered by Anderson’s research, the editor was Alastair Hetherington, a sainted figure in British journalism. Ireland, however, was one of his blind spots, and he gave his deputy, John Cole, licence to do as he liked.

As an unrepentant illiberal unionist who identified himself as British, what he liked was Stormont and its institutions of repression. Cole, ‘unmistakenly a Protestant son of Belfast’, as his Guardian obituary noted, championed internment in 1971 and went on advocating measures aimed at denying nationalists their civil rights.

It was significant that, within Britain, Cole was a blatant supporter of the Labour party, exerting an influence over its thinking – or, more pertinently – its lack of thinking about ‘Northern Ireland’. Remember Roy Mason and Merlyn Rees?

More on Cole in a moment. First, we need to consider the outline of Anderson’s major argument, that two very similar conflicts were treated very differently by the press. Both Algeria and Ireland were conquered by imperial nation states, France and Britain respectively.

Both were colonised. The settlers were given land confiscated from the indigenous inhabitants, which provoked considerable hostility. This was exacerbated by the fact that the incomers held different religious and cultural views. There was little assimilation.

The migrants from France to Algeria, the colons, became known as the pieds-noirs (black feet). The planted people in Ireland’s Ulster counties regarded themselves as British and Protestant, self-identifying as unionists or loyalists. They successfully defeated the attempt to create a united independent Ireland, preferring to impose their will on hundreds of thousands of people within an artificial statelet based entirely on religious grounds.

Anderson shows how British editors who were willing to overlook horrific bloodshed spilt during the dirty war fought by the French against Algeria’s rebellious Arab population were unwilling to view the northern Irish conflict in the same way. 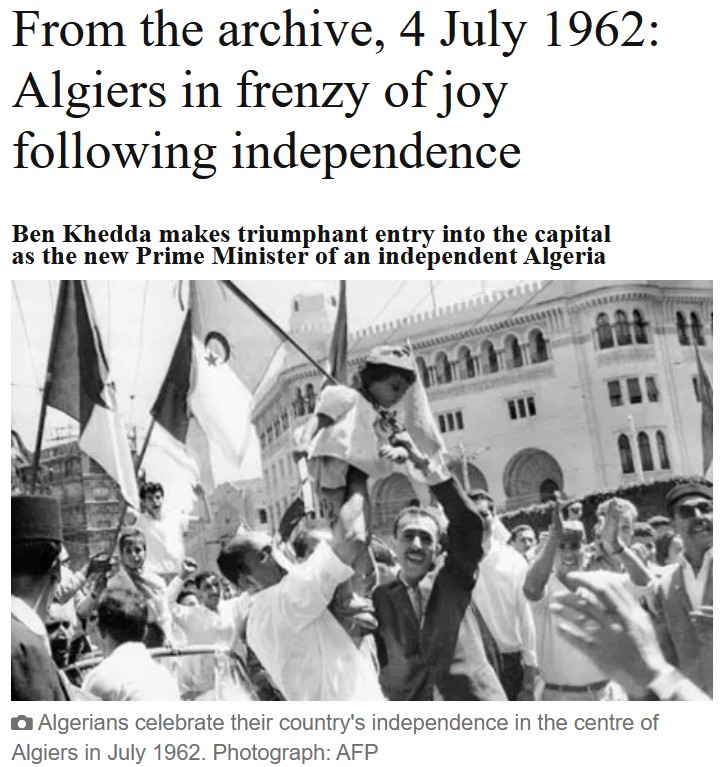 So, French colonialism was unacceptable while British colonialism was essential. The French use of torture was intolerable; the British use of torture was understandable. Algerian nationalist freedom-fighters were good. Irish nationalist freedom-fighters were bad. So bad, indeed, that they were designated as terrorists. These binary comparisons may sound simplistic, but, at heart, it was the British media’s justification for treating every aspect of the conflicts differently.

For example, a Guardian editorial raged against de Gaulle’s 1958 peace initiative on the grounds that it was wrong to expect the rebels to lay down their arms while the French forces would remain armed. It further contended that the disarmament process should be carried out ‘under impartial international auspices.’

Yet Guardian editorials routinely called for Irish republicans to disarm without demanding that British troops should stand down. As for ‘impartial international auspices’, the paper staunchly opposed the call, initially made by Jack Lynch, for the involvement of the United Nations.

Layer by layer, over several chapters, Anderson peels away at the inconsistent coverage. Most telling of all, his study illustrates how beneficial it was for successive British governments – meaning, of course, the British state – to have the nation’s foremost liberal newspaper outlets acting as enthusiastic propagandists on its behalf.

Aware that editors are responsible for their newspaper’s leading articles and also aware that, in The Guardian’s case, the deputy editor was given responsibility for Irish affairs, he rightly links them as ‘Hetherington-Cole’ throughout.

(Incidentally, an oddly similar situation occurred at the London Times. Its editor, William Rees-Mogg, later admitted that his paper’s pro-unionist editorials during the Troubles were overly influenced by his chief leader writer, Owen Hickey, an Irish-born conservative.)

Of the many sins of Hetherington-Cole, by far the most heinous was its willingness to justify the use of torture during interrogations by the RUC and the army. The torture of fourteen nationalists arrested in Belfast was just fine because ‘the information obtained’ from them ‘was undoubtedly responsible for saving the lives of innocent civilians.’ This was a giant falsehood. As for the men’s claims that they were tortured, according to Hetherington-Cole, their claims lacked credibility.

But the French use of torture, said the paper, was scandalous. And this time, it was official denials that it had been used that were said to lack credibility. Once again, bad France and good Britain.

Anderson quotes scores of shameful editorials about Ireland. In 1971, The Guardian told its readers ‘the restraint of soldiers’ in Belfast ‘is superhuman.’ A year later it claimed, without a shred of proof, that snipers were among civil rights marchers on Bloody Sunday. In 1973, turning truth of its head, it lamented that propaganda was the IRA’s ‘conspicuous talent.’ 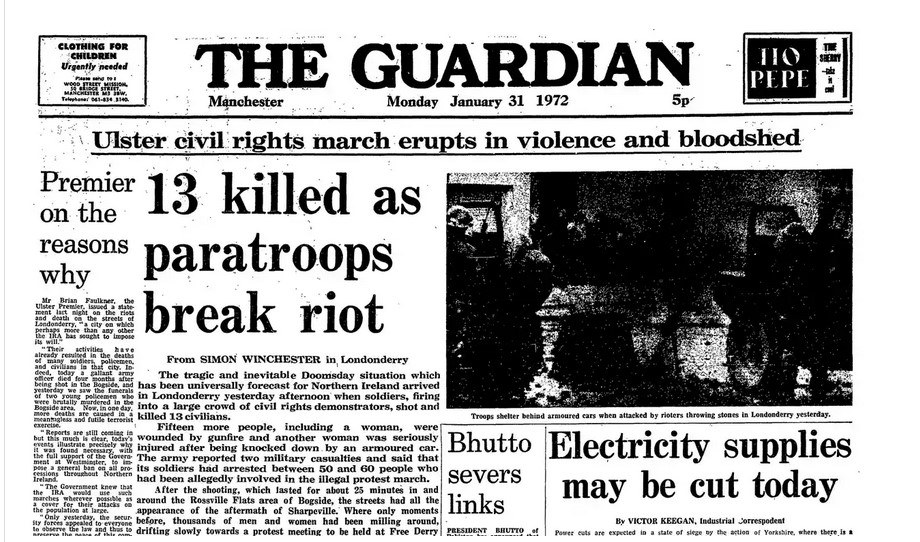 Also, it would be remiss of me to overlook the other character who, from the late 1970s, played a key role in shaping The Observer’s Irish coverage. Conor Cruise-O’Brien arrived at the paper as its editor-in-chief, fresh from his time as the Dáil minister who had introduced the broadcasting ban on Sinn Féin.

Anderson points out that he had excused atrocities carried out by the National Liberation Army of Algeria on the grounds that legitimate violence was an understandable reaction to colonization. In Ireland, by contrast, he could not stomach the IRA’s violent resistance to colonization, even to the extent of daring to vindicate loyalist death squads by telling Catholic victims: ‘Ye brought it on yourselves.’

It would be foolish to see O’Brien as a maverick. Anderson’s overall thesis makes it clear that his views were shared by many editors and journalists in Britain (and, yes, Ireland) who were prepared to condone the ill-treatment of nationalists while averting their gaze from unionist misconduct. This was a service to the state that The Guardian and The Observer were supposedly pledged to hold to account.

We should remind ourselves that there was, in the context of the Troubles, a window of opportunity for a truth-telling media to inform the public in Britain about what was being done in their name. Instead, as we continue to see today, the years of misinformation mean that most Britons are unaware of the facts about a place they regard as part of the United Kingdom.

*Rewriting The Troubles by Patrick Anderson is published by Greenisland Press and retails at £18 / €22 and is available and is available from An Fhuiseog, Belfast, and the Sinn Féin Online Shop, Dublin