SDLP Writes Fitt Out Of Its History 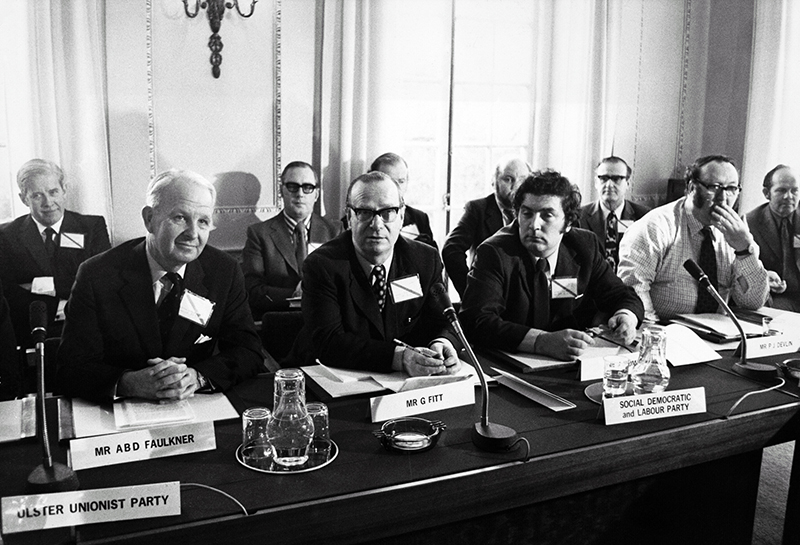 Last month, a new documentary film, In the Name of Peace: John Hume in America, was shown at the 29th Galway Film Fleadh. Subsequent discussions resulted in some SDLP members and supporters resorting to an old refrain that Sinn Féin had written John Hume out of recent Irish history – which I don’t believe to be true.

Even Eamonn McCann from People before Profit had something to say on the subject: “The Bogside has become a tourist attraction. I listened in to one of these guys giving schoolchildren from southern Ireland an account of a history of the Bogside, in which John Hume didn’t figure until the Hume-Adams talks… That’s the level of the distortion of history which supporters of the IRA are involved with.”

Since Sinn Féin eclipsed the SDLP in 2001 this gripe and accusation of revisionism has become shriller and has been repeated by, among others, Seamus Mallon and Brid Rogers, and the same theme is asserted in Cillian McGrattan’s book Memory, Politics and Identity (2012).

But as the Andersonstown News’ columnist Squinter pointed out on Twitter in less than 144 characters, no party has written a former leader out of its party’s history more comprehensively than the SDLP.

That, of course, is a reference to Gerry Fitt.

(Below, I shall be republishing a feature I wrote on Fitt after his death in 2005. I am also indebted to Ciarán MacAirt – Twitter @ciaranmacairt – for supplying me with documents unearthed from Kew Gardens revealing the extent of the corruption of Gerry Fitt.)

In the pages reproduced below we see the mentality of Fitt at work – “He feels that every effort should be made to pin responsibility for the McGurk’s bar explosion on the provisionals.”

Fifteen of his neighbours have been slaughtered and his priority is to blame the killings of Catholic children, women and men in McGurk’s bar on the IRA.

The point I wish to emphasise is that to have been under his leadership and supervision for seven years, and to have known him for some years before that, most if not all in the senior echelons of the SDLP must have been aware of how perverse Fitt was, the lengths to which he would go to curry favour with the British, how he would sink his own people without qualm or compunction. 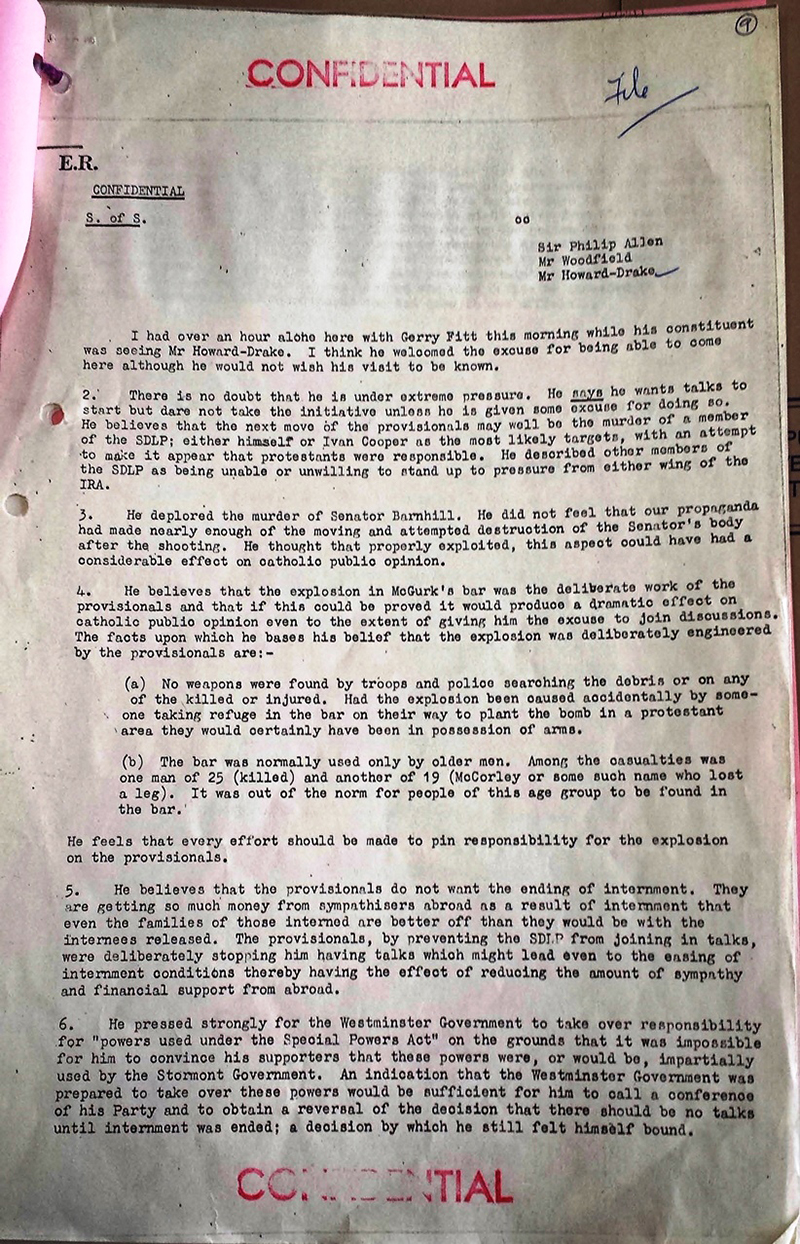 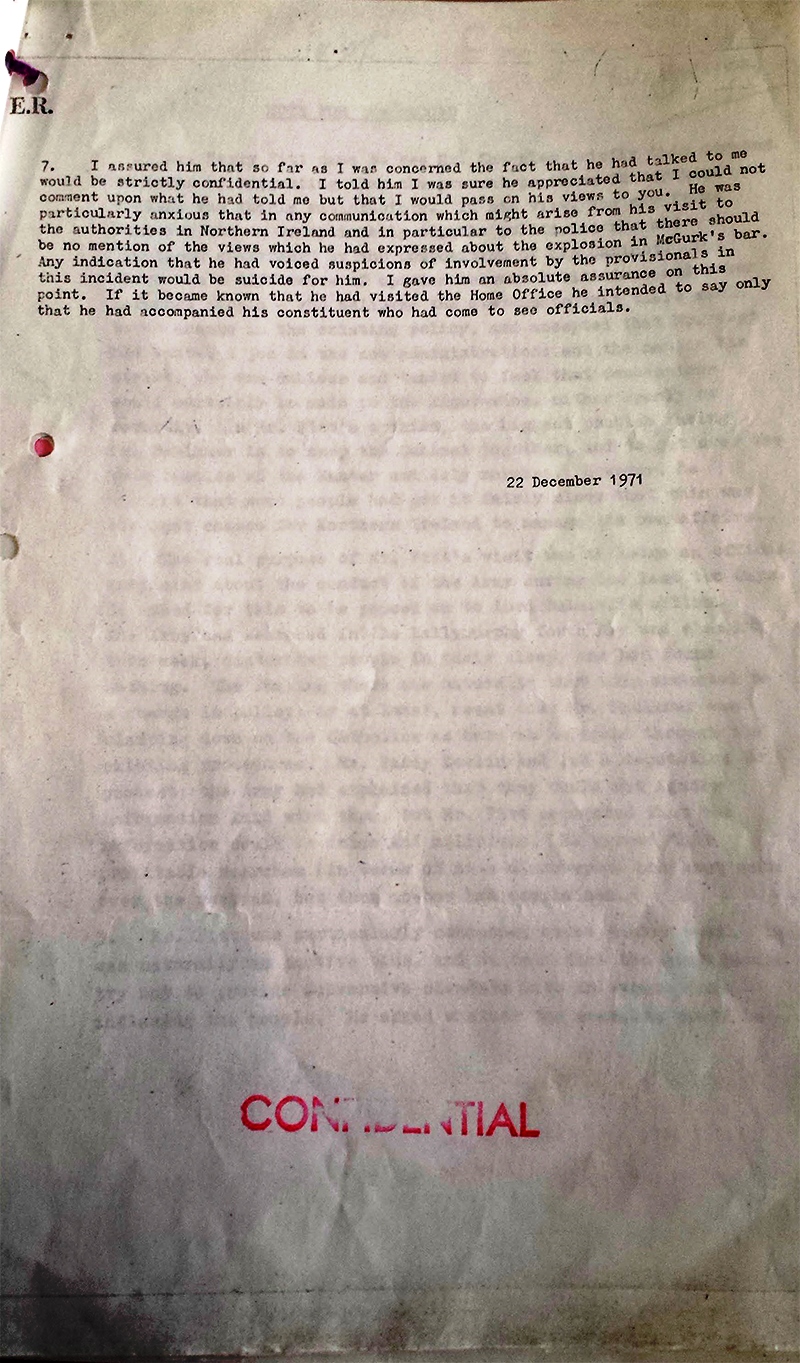 On the morning of Friday, 24th April, 1981 (Bobby Sands, at this stage an MP, and on the 55th day of his hunger strike), Gerry Fitt rings up the NIO seeking assurances that Mrs Thatcher is not going to give into the prisoners’ five demands.

“I gave him that assurance and he was content,” writes Jonathan Margetts, a parliamentary secretary.

“I gave him that assurance and he was content.”

What a mean-spirited, malevolent, evil man was Gerry Fitt, seeking a death sentence for a 27-year-old prisoner who had spent one-third of his life in British jails on Irish soil. 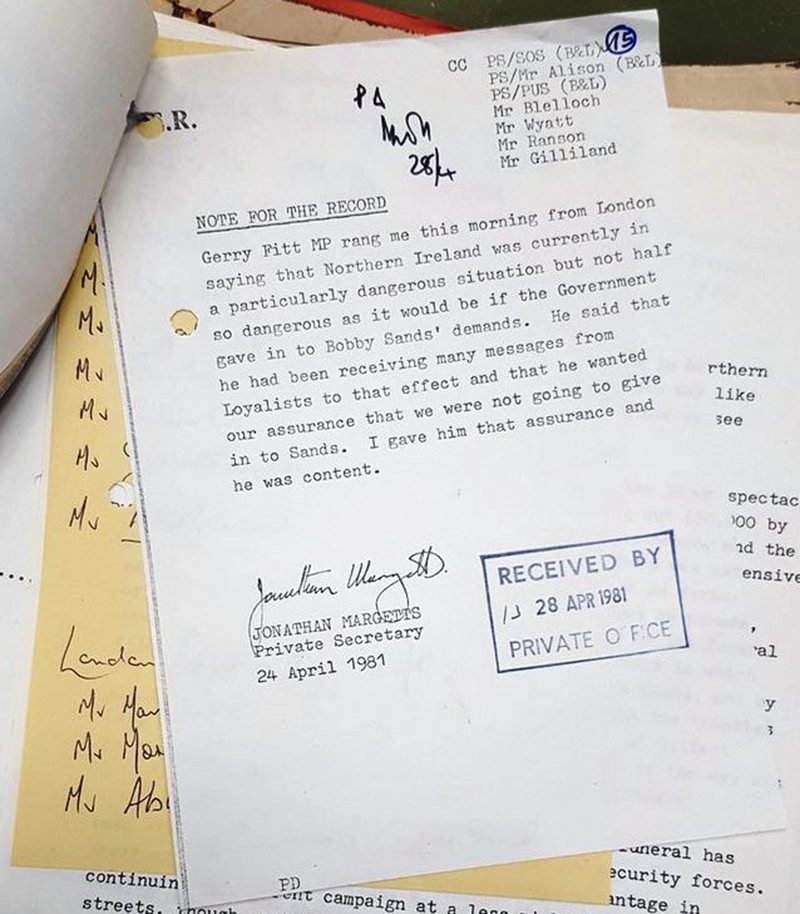 FITT FOUND HIS FEET AT THATCHER’S HEEL (from Daily Ireland, 2005)

BBC Northern Ireland broadcast a documentary on Lord Gerry Fitt who died in late August in England, his adopted home. It was based on a lengthy interview about his life which he gave to Seamus McKee last year. Among those interviewed were many of his friends and allies, his opponents and critics. I participated in the documentary though my most trenchant criticisms of the former MP for West Belfast were not aired.

I first met Gerry Fitt when I was a waiter in the International Hotel in Donegall Square South, behind Belfast City Hall, in 1968 when I was fifteen. Before going to work, I had watched him perform brilliantly on television against a unionist politician. My family and I cheered Fitt. Indeed, such was the intensity of the finger pointing, the raised voices and the ill-tempers that W.D. Flackes, the legendary political correspondent of the BBC, almost had to keep the two rivals apart. So, imagine my surprise when I came into work an hour later to find Fitt and the unionist at a table beating drink into them, laughing and joking as if it were all really just a bit of fun.

Many people suffered during the conflict, suffered appalling injuries from gunshots and bombs and plastic bullets. Fitt got hit over the head by an RUC baton in the civil rights march in Duke Street in Derry on 5 October 1968 and it only added to the nationalist perception of him as a local hero, as a man who led from the front. However, others were to claim that Fitt and some of the British Labour MPs present were deliberately pushed to the front since their heads being batoned would receive more publicity than an ordinary five-eighth’s!

Earlier that year, speaking at a Connolly commemoration in Derry Fitt said, “The day for action has arrived…if constitutional methods do not bring democracy to the North, then I am quite prepared to go outside constitutional methods” (Irish News, 22 July 1968.) In his book, War and an Irish Town, Eamonn McCann claims that on 5 January 1970 Fitt told a crowd at the corner of Victoria Street in Derry that, “it’s time to get the guns out.”

At the Westminster general election of June 1970 Fitt was defending West Belfast which he had won four years earlier. On the afternoon of polling I and a bunch of mates were sitting in a friend’s back garden in Iveagh Crescent, off the Falls Road. One of Fitt’s election workers, who knew one of my mates, called in. He said, “I’ve some bad news. Gerry’s in serious trouble!”

“What’s wrong?” we asked. He said that the unionists were personating “like mad” and that John Laird (now Lord Laird) might take the seat. The question was put, was there anything we could do to help. He hesitated, then asked, “Are you really prepared to help?” We assented and that’s when he gave each of us five polling cards and told us which schools to go to and vote for Gerry. Afterwards, I could never take the SDLP seriously when they complained about voter fraud.

After Fitt’s death the newspapers were full of glowing tributes to him. I have no doubt that he was a great raconteur. Martin Lynch once told me that Fitt was the best of company and could keep you entertained all night. I don’t doubt that either. However, one obituary, in particular, made me very angry, and put Fitt’s disloyalty into context.

It was by Henry Kelly, writing in an Irishman’s Diary in the Irish Times on September 1st. Of Lord Fitt of Bell’s Hill he wrote that he “never strayed from his original, basically socialist, principles.” What nonsense. But worse was to come. Kelly told a story about himself and Gerry Fitt, at a time when he, Kelly, was Northern Editor of the Irish Times in the early 1970s. One night the two of them joined Ted Heath, who had became Prime Minister in June 1970, in No 10 Downing Street.

“The drink flowed and the hours sped past,” wrote Kelly. Gerry Fitt took out his mouth organ and played a medley of tunes, “much to the delight of the prime minister. Ted Heath was genuinely pleased and though he didn’t join in with some of us who slurred Danny Boy and a few other Irish ballads, when Gerry finished Heath suggested to him that he should have a go at other musical instruments.”

On the way out of Number 10 Gerry Fitt embraced Ted Heath and cracked a joke: “You know, Ted, I’d have given my right arm to have played the violin.”

What I find disgusting about this episode is that just two weeks after Heath became Prime Minister his soldiers imposed the curfew on the Falls Road, shot dead four of Gerry Fitt’s constituents, gassed an entire community, young and old alike, wrecked a thousand homes, and here was Fitt, their MP, drinking with and embracing the man responsible.

Could you imagine the reaction in Leeson Street if Henry Kelly had published that story back then?

During the week which saw the introduction of internment – which Heath had also sanctioned – close to a dozen of Gerry Fitt’s constituents were killed by the British army, and four of his constituents – “the hooded men” – were tortured. Indeed, the Irish government took the British government to the European Court on torture charges – but Gerry would ideally just loved to have been able to play some Yehudi Menuhin to Ted. Then followed Ted’s Bloody Sunday.

After resigning as leader of the SDLP in 1979 Gerry Fitt spent more and more time at Westminster. He knew he was finished and had nothing to lose when he stood up in the House of Commons two years later to support Thatcher’s position on the hunger strike. He told her not to give the prisoners their five demands and not to compromise. She was to quote his speech to justify her stance and the speech was distributed by British embassies to media around the world. Gerry Fitt helped condemn brave men to death in jail. Of course, within weeks of the West Belfast electorate rejecting him in 1983 Mrs Thatcher awarded him a life peerage for services rendered.

Gerry Fitt’s mouth organ and his words were sweet music to successive British premiers. Whether intentional, he encouraged the British in their intransigence and to believe that there could be a military solution. On the one hand, there was his work on behalf of the Guildford Four and others, but on the other there was his more pernicious propaganda work on behalf of the British government.

The harshest criticism of him in the obituaries was the comment that he had perhaps lost his way. But, let’s be truthful, at least on behalf of those who died at the hands of the British, Gerry Fitt didn’t lose his way – he found his feet and it was at Thatcher’s heel in the Commons and on the floor of the House of Lords.