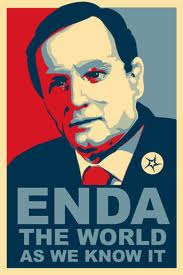 I was interviewed by Brian Rowan in a feature for the ‘Belfast Telegraph’ about next week’s elections in the South. Feature was titled, ‘When Sinn Fein risks need to translate into Dail seats’. “The party’s former PR director is not playing the numbers game in the Republic’s imminent election,” says Brian Rowan [Tuesday, 15th February 2011].

Danny Morrison grew up inside the republican movement alongside Gerry Adams, reached significant positions of leadership and, on many occasions, was the man who put that leadership’s thinking into words. He is probably best-known for a 30-year-old speech – in 1981 he defined the republican goal of taking power with an Armalite in one hand and a ballot paper in the other.

And Morrison was there in 1986 at the Ard Fheis when Sinn Fein split on the issue of ending its abstentionist policy in relation to the Dail.

“‘86 was to facilitate the opportunity – to get to the position where they are today,” he told the Belfast Telegraph.

Morrison is talking about the now-imminent Irish election and the possibility of Sinn Fein becoming a significant player in the Dail.

“It is Sinn Fein stepping onto the main stage,” he said, “even if they aren’t in government. It’s them now being taken seriously.”

In the reading between those sentences he outlines his expectations – that Adams will be elected and that Sinn Fein will have a significant number of TDs. But he is not playing the high numbers game suggested in some opinion polls.

So what would be a success? “Anything over seven [seats].”

Would double figures be a huge success? “Absolutely.”

“If you go over 10/12 [seats], what it does is that it confirms the viability of the original strategy, which was about having a powerful presence or influential presence in parliament in the south and in government in the north,” Morrison said. “It opens up all sorts of possibilities.”

But he accepts this is new politics for Adams; that his decision to give up his West Belfast seat to compete in the Irish election “is not without risk”.

We all know that Adams’ political comfort zone has been within the peace process. For all Adams’ denials of IRA membership, he was part of the war before he was part of the peace. And it was his leadership, alongside Martin McGuinness and others, that moved the IRA in a different direction. On the streets of Dundalk, Drogheda and Dublin, the issues and day-to-day priorities are very different: the economy, jobs and emigration. And, on the fine detail of some of this, we have seen Adams stumble.

But Morrison said: “He will be a quick learner. Adams has a plus on his side and that is that he is a celebrity, that he is a leader.

“So the downsides could be neutralised by these positives: easily-recognisable figure … he has charisma. There’s no doubt about that.”

We will know soon if this really is Sinn Fein’s moment of opportunity – the election it has been waiting for since that policy decision way back in 1986. And we will know if Adams’ risk was worth taking.

“The decision to run in Louth certainly took me by surprise,” Morrison admitted.

“Nobody was expecting it. It took everybody by surprise and it comes not without risks.”

But Morrison also knows that, for all its surprise, this decision will have been carefully thought through – not just by Adams, but also by those closest to him.

“Of course, things like that are kept tight, but also the people who make those decisions aren’t fools; they would make a judgment call on it,” Morrison said.

That call has been made and now Adams has to deliver – both personally and in the wider party sense. Morrison is not playing the numbers game that others are, but in a couple of weeks’ time it will be on numbers that the Sinn Fein president – and his party – will be judged.