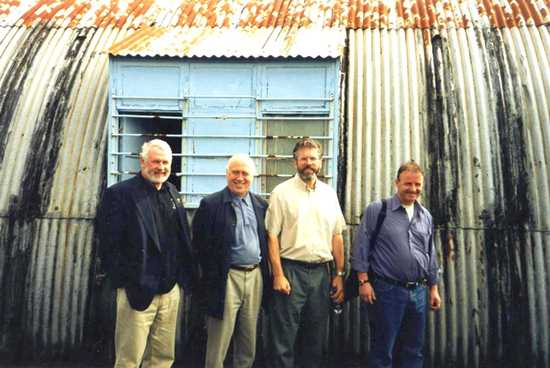 BBC’s flagship documentary programme Spotlight is, incredibly, forty years old this week! I remember watching it back in October 1973 in Cage 2, Long Kesh, along with seventy other internees on a small black and white television mounted on the back wall of the Nissen Hut, little realising that the Troubles were infinite and that years later I would be interviewed for the programme dozens of times.  (Picture, above: revisiting the Cages about ten years ago with Martin Ferris TD, Gerry Adams MP and my friend Jim Gibney)

Some of Spotlight’s cub reporters – Jeremy Paxman, Gavin Essler, Alex Thompson – would go on to become totems of British television news and documentaries with their idiosyncratic styles of journalism and interviewing techniques. In the mid-Seventies another to work on Spotlight was Bernard Cornwell (who went on to write the Sharpe historical novels as Bernard Wiggins).

Anyway, the anniversary programme is being broadcast tonight on BBC1 at  22: 35pm and includes an interview with me.

16th October. Returned from my week-long trip to the UBUD Writers & Readers Festival in Bali. Finished The Thirty Nine Steps by John Buchan which I first read in 1969. On my Kindle I have the rest of the Richard Hannay series to read. The writing is so ‘old-fashioned’ with archaisms, and the dialogue is laced with anti-Semitic, racist and sexist comments, and plotted with preposterous coincidences, yet it has a certain charm or nostalgic charm. Buchan, who was also a unionist MP in Scotland was virulently anti-Catholic and anti-Irish.

14th October. At the UBUD festival I took part in a lively panel discussion, The Press Club, which was set, appropriately enough in a cocktail bar! Earlier, I debated the subject of ‘Dangerous Ideas’ with several other writers in a session chaired by the consummate moderator, Michael Vatikiotis (who once worked for BBC Northern Ireland). On the platform was Solahudin, a leading expert on the jihadi movement in Indonesia and author of The Roots of Terrorism in Indonesia; Lydia Cacho, a Mexican journalist who suffered torture and imprisonment for exposing politicians involved in international child sex-trafficking; and Mona Prince, an Egyptian novelist and activist who is being encouraged to run as President of Egypt. Mona and I had a run-in during the discussion because of her support for the military coup against Morsi.

13th October. Read from my novel, Rudi, along with other authors reading from their works at the Long Table Lunch event at the UBUD Writers and Readers festival in Bali.

12th October. Finished A Writer at War by Vasily Grossman, a great account of the German defeat at Stalingrad and the Russians advancing on Berlin.

7th October. Met with a delegation from civil society in Bahrain at Stormont meeting organised by Jeffrey Donaldson DUP MP.

2nd October. Did radio interview with Radio Ulster’s Stephen Nolan about the feature I wrote on the Assembly. Did television interview with Mark Devenport on same feature.