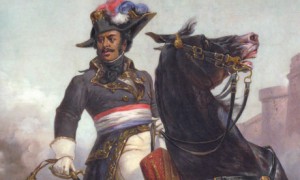 Finished The Black Count by Tom Reiss, a brilliant and absorbing biography about the author Alexandre Dumas’ father, Alex, son of a black slave and aristocratic fugitive in Saint-Domingue [Haiti]. He rose to become a hero of the French Revolution, a general in charge of a division of 53,000 soldiers, Commander in Chief of the Army of the Alps, and whose criticism of Napoleon’s empire-building and aggrandisement of power, led to him being ostracised, victimised and virtually written out of history. To this day there is still no monument in France commemorating the life of General Alexandre Dumas.

The adventures and misadventures of the father were what gave Dumas the material for such novels as The Three Musketeers and The Count of Monte Christo.

I never completed my A-Level History (under Jonathan Bardon at the College of Business Studies) which included the French Revolution but have always been fascinated by it. Napoleon was a monster who seized power and destroyed the progressive gains that had been made. Slavery, which had been abolished in the Revolution, Napoleon reintroduced, his forces reoccupying the republic of former slaves that had been established in Saint-Domingue. Toussaint L’Ouverture, the black republican hero of the republic, was fooled into going to an informal diplomatic meeting, was seized, brought to France in chains and thrown into a freezing cold cell where he eventually died.

“Cornered at a plantation on the slope of La Soufrière volcano, some three hundred of the island’s leading black and mulatto rebels – men and women – chose to take their own lives rather than live to see slavery return. Screaming “Live free or die!” they blew themselves up with their remaining gunpowder.”

Back in France Napoleon issued a law banning all officers and soldiers of colour who had retired or been discharged from the army from living in Paris. The following year he outlawed marriages between people of different skin colours. General Dumas, recently released from an Italian prison, where he had been poisoned, would need to request a special dispensation to be allowed to stay in his own home which was in a zone forbidden by retired military men of colour. Napoleon then created segregated infirmaries and ordered that “coloured men who will be treated there will be placed in a separate room, so that they have no communications with the White patients.”

So, there you have it, preceding Churchill’s willingness to use gas against Iraqis in 1920, Hitler’s monstrous perfection of mass asphyxiation, and Verwoerd’s apartheid laws, France’s Emperor Napoleon Bonaparte led the way.