The Compression of Expression 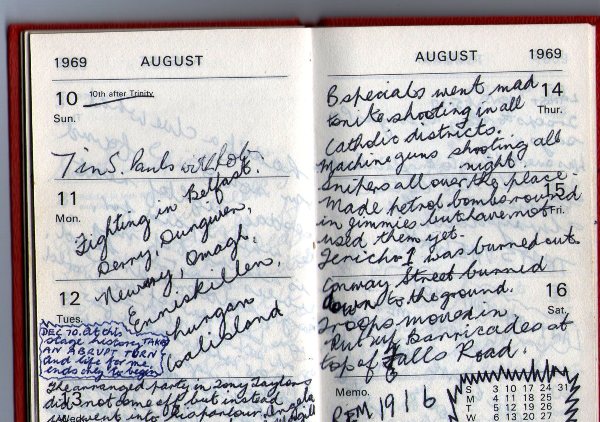 Wrote a feature titled ‘The Compression of Expression – & The Lost Art of Handwriting’ for today’s Andersonstown News, and the long title is self-explanatory! Pics are of me, aged 5 at primary school, and an example of my spidery handwriting even when I was 16! Here it is:

And now it might look as if all Miss Gilleece’s work has come to nothing.

This warm gentle lady, who seemed middle-aged even then, patiently stood over us five-year-olds and showed us how to form our first letters on the written page with a pencil on a cheap jotter.

We were taught in St Teresa’s primary, in a wooden hut tucked into the corner close to the lane on the Glen Road that led to St Pat’s Home; the freezing classroom temperatures somewhat staved off by a noxious paraffin oil heater.

To my young eyes so many letters looked the same – ‘b’ and ‘d’, ‘p’ and ‘q’, and ‘m’ and ‘w’ – that as far as I was concerned they were interchangeable. Why did we need so many letters anyway! Yet, no matter how often I got mixed up Miss Gilleece would bend down to my size, draw the letter properly and ask me to copy hers.

We progressed to nib pens and I was given the job of trekking across the yard to the toilets and sinks and mixing the ink powder with water in a large tin. Our desks had little sunken inkwells into which the ink was poured, requiring a steady hand.

Later, Miss Gilleece was replaced my Master Oliver Campbell who berated me because I was incapable of writing on the line. I didn’t mind slicing through the line with g, j, p, q and y, but I never wanted any of my other little friends to come into contact with that diseased line! I am sure Freud can explain it.

Anyway, all of us – including you, reader – emerged from education with an ability to write in longhand, even if it was a scrawl, and even at the age of 16 mine still was. However, legibility can be critical. The stories of millions being at stake and lawyers arguing over a misspelt word or wrongly-placed comma are legend. I have a theory that half of all illnesses in pre-computer times were exacerbated by chemists dispensing the wrong medicines when trying to decipher the notoriously, atrocious handwriting on prescriptions!

In the modern world of electronic communication – from emails to text messages to social networks like Twitter – there is a real threat to the art of expression and writing. Probably the only times when one will actually use a pen nowadays and write longhand is to sign a cheque/receipt or make out a birthday or Christmas card.

Initially, I wrote all my features in longhand, before typing the draft onto the computer. But in the last five years, I just go straight to the keyboard, type, make corrections and produce a clean copy – no evidence of spellings corrected or interpolations.

And yet something has been lost along the way. The computer makes it too easy, too speedy, whereas handwriting calls for a more measured pace more in tune with one’s thought processes. There is a feeling of companionship between the pen in one’s hand and its contact with the blank page.

I am not being a Luddite: I know that the IT age has brought huge advances. Even this week the capitulation of Tunisia’s authoritarian ruler, Zine el-Abidine Ben Ali, after mounting street protests, has been attributed to largely informal online networks. As a possible model for revolution it presents a serious threat to other autocratic rulers in the region.

One place where the art of the handwritten letter possibly still thrives is in prisons: at least in those where inmates have yet to be granted access to telephone landlines. When I was on remand in the Crum the rule was one page only per letter and you had to get permission from the governor if you wanted to write longer letters.

Admittedly, many prisoners struggled to express themselves. A friend of mine spent three nights composing a letter to his wife. He ended up with about four paragraphs and all that it read was, ‘How’s Mary… How’s Joseph… How’s Mickey.’ He said, ‘There were that many “Hows” in it that I felt like a Red Indian!’ And to crown it all his wife never even received it!

Still, there is an appreciation in receiving something into which clearly an effort has been put. And there are certain etiquettes: you would send a signed card of condolences to a bereaved friend, not an email, because, clearly, we recognise that there is value to the written word.

Texting, though, allows for a certain laziness, vengefulness, cruelty and cowardice, exemplified by those cases you hear of where someone breaks off their engagement with words like Really busy. Need space; or, Srsly, U R gettin annoying; or, I M Gay.

When I look back at my attempts to express myself I imagine a progressive improvement. But at the same time, because of the infrequency of actually writing by hand, my script has become indecipherable. And so, in memory of Miss Gilleece I bought a fountain pen which I increasingly use when preparing notes for whatever it is I am working on. And in memory of Master Campbell my letters, my words, never touch, and never will, those lines, those imposters, on the page!