“Old people cause a lot of the world’s misery. They contaminate our lives. They spread a sour smell in the tram. Like a pot of fruit preserves that has been opened and then forgotten. Everything over sixty should be done away with.”

“Why not everything over forty?” Louis asked.

“You wouldn’t hear me complain,” Fritz said, “but we have to stay humane. Between forty and sixty there are still signs of life.” 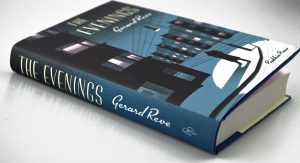 That’s from The Evenings by Dutch writer Gerard Reve about ten December evenings until New Year’s Eve, 1946, in the life of twenty-three-year-old office worker, Fritz Egters.

Fritz lives a boring, mundane life, a life of futility, in Amsterdam with his elderly parents who drive him crazy and who only half get on. He wanders from bar to cinema to the homes of his brother and friends and acquaintances and they talk the greatest shite in the world.

Though amounting almost to a study in misanthropy I really enjoyed this book for its stylish writing. I found it captivating despite the deliberately stilted and sometimes tedious dialogue.

We are granted the privilege of observing Fritz’s inner life, what he thinks in comparison to what he actually says, and it is so funny it had me laughing aloud and reminded of a novel I read many years ago, also a first novel, The Peculiar Memories of Thomas Penman by Bruce Robinson. Robinson also wrote the screenplay of The Killing Fields and wrote and directed Withnail and I. There are many preposterous scenes in that book involving fifteen-year-old Thomas. One in particular sees him steal some photos from his grandfather’s ‘amazing collection of pornography’ which he shows to his friend Maurice, the vicar’s son, who is ill in bed, smoking a pipe and drinking a mix of gin and sherry.

“You’re telling me you’ve got a photo of a woman with a duck up her arse?” says Maurice.

“How did they get the duck up?”

Well, The Evenings is as mad and as scatological as that. Fritz has vivid, wild and monstrous dreams and he is obsessed with baldness (not his own, that of others), loves to share stories about acts of sadism and can be quite tactless, cruel and sexist on occasion, yet he is a sad creature given the tedium of his life at home.

Visiting his friend Joosje he comments about her one-year-old child: “It is, in truth, a terrible little monster…The nerves have developed all wrong. It probably doesn’t have long to live…The head is bound to become distended as well…It is growing all crooked, like a plant to the light, mark my words.”

Fritz loves going to funerals or talking about cancer and terminal illnesses and horrible ways of dying. He is morbidly obsessed with newspaper stories involving death and always likes to share ‘nasty stories’. Like the one about the farmer on top of a wagon who calls for someone to throw him a pitchfork. He peers over the edge of his wagon just as it is thrown and the tines penetrate his eyes and kill him. A child playing daredevil with an axe and block cuts the hands of his friend because his friend thought he wouldn’t go through with the strike and the child thought his friend would pull his hand away on time.

Fritz talks excitedly about a child killed by an exploding grenade (‘Glorious”) or the seven-year-old who accidentally detonates an anti-aircraft shell he hits with a hammer. “It always ends with: he will have to do without his left hand. Or: the child breathed his last on the way to the hospital.”

Another story he tells – “a real whopper” – involves a woman bathing her child. Her father, in another room, is playing with their other child – throwing her in the air – when he drops her. She lies dead on the floor and he screams. The mother runs in to see what has happened, then remembers the baby in the bath, runs back, only to find that the toddler has drowned. “You should tell that one when there are women around, you’ll laugh yourself silly.”

Reve, who died in 2006, was the first openly gay writer in Holland and is considered one of the greatest post-war Dutch authors. A controversial figure, many of his later writings feature violent and sadomasochistic themes. The Evenings is now considered a modern masterpiece and has been voted the best Dutch novel of all time.