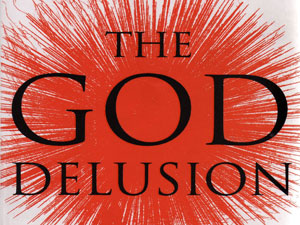 The inspiration for this book, according to its author Richard Dawkins, was a two-part documentary he made for Channel 4 in Britain, Root of All Evil?in 2006. He aims to offend, to outrage, by his attacks on all faiths (and agnostics!) and how ridiculous he considers belief in a God. It is not just a delusion but ‘a pernicious delusion’. In Chapter 2, The God Hypothesis, he says:

‘The God of the Old Testament is arguably the most unpleasant character in all fiction: jealous and proud of it; a petty, unjust, unforgiving control-freak; a vindictive, bloodthirsty ethnic cleanser; a misogynistic, homophobic, racist, infanticidal, genocidal, filicidal, pestilential, megalomaniacal, sado-masochistic, capriciously malevolent bully.’

And that’s just for starters! He says the New Testament is no better and cites the fundamentals of Christian belief as a variety of the following:

*In the time of the ancestors, a man was born to a virgin mother with no biological father being involved* The same fatherless man called out to a friend called Lazarus, who had been dead long enough to stink, and Lazarus promptly came back to life* The fatherless man himself came alive after being dead and buried three days* Forty days later, the fatherless man went up to the top of a hill and then disappeared bodily into the sky* If you murmur thoughts privately in your head, the fatherless man, and his ‘father’ (who is also himself) will hear your thoughts and may act  upon them. He is simultaneously able to hear the thoughts of everybody else in the world* If you do something bad, or something good, the same fatherless man sees all, even if nobody else does. You may be rewarded or punished accordingly, including after your death* The fatherless man’s virgin mother never died but as ‘assumed’ bodily into heaven* Bread and wine, if blessed by a priest (who must have testicles), ‘become’ the body and blood of the fatherless man*

When put like that it is striking. Furthermore, Christianity was spread by the sword, ‘wielded first by Roman hands after the Emperor Constantine raised it from eccentric cult to official religion, then by the Crusaders, and later by the conquistadores and other European invaders and colonists, with missionary accompaniment.’

Thousands of people, he points out, have been ‘tortured for their loyalty to a religion, persecuted by zealots for what is in many cases a scarcely distinguishable alternative faith. Religion devours resources, sometimes on a massive scale…Devout people have died for their gods and killed for them; whipped blood from their backs, sworn themselves to a lifetime of celibacy or to lonely silence, all in the service of religion. What is it all for? What is the benefit of religion?’

He analyses what is known as Pascal’s Wager:

‘The great French mathematician Blaise Pascal reckoned that, however long the odds against God’s existence might be, there is an even larger asymmetry in the penalty for guessing wrong. You’d better believe in God, because if you are right you stand to gain eternal bliss and if you are wrong it won’t make any difference anyway. On the other hand, if you don’t believe in God and you turn out to be wrong you get eternal damnation, whereas if you are right it makes no difference. On the face of it the decision is a no-brainer. Believe in God.

‘There is something distinctly odd about the argument, however. Believing is not something you can decide to do as a matter of policy. At least, it is not something I can decide to recite the Nicene Creed, and I can decide to swear on a stack of bibles that I believe every word inside them. But none of that can make me actually believe it if I don’t. Pascal’s Wager could only ever be an argument for feigning belief in God. And the God that you claim t believe in had better not be of the omniscient kind or he’d see through the deception. The ludicrous idea that believing is something you can decide to do is deliciously mocked by Douglas Adams in Dirk Gently’s Holistic Detective Agency, where we meet the robotic Electric Monk, a labour-saving device that you buy ‘to do your believing for you’. The de luxe model is advertised as ‘Capable of believing things they wouldn’t believe in Salt Lake City’.’

His chapters on cosmology are excellent but there are others where he descends into complex arguments on memes and I was completely lost.

This book is full of little nuggets, including this dismissal of fear of death from Mark Twain: ‘I do not fear death. I had been dead for billions and billions of years before I was born, and had not suffered the slightest inconvenience from it.’