The IRA In Film 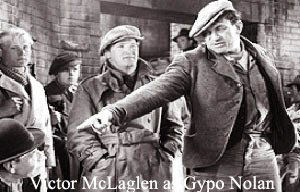 The London ‘Times’ journalist, Kevin Maher, interviewed me for a feature on how the Troubles have been depicted on film. His feature was published on April 11th and can be read here in full.

REBIRTH OF THE REEL IRA

Do films on the Troubles illuminate or just inflame?

The Northern Ireland Troubles are back. Not on the streets, but on celluloid, where the dramas and the bloodshed of the past 40 years are suddenly springing to life in brash and variegated forms. We’ve already had the award-winning Hunger, which told the story of Bobby Sands through an unsparing art-house prism, all Bressonian close-ups and relentless physical punishment. On Sunday BBC Two aired Five Minutes of Heaven, an apparent true-ish story about a traumatised Catholic, played by James Nesbitt, who witnesses the murder of his brother at the hands of a Loyalist killer, played by Liam Neeson. Next up is Fifty Dead Men Walking, a preposterous action thriller inspired by the real-life story of the IRA informer Martin McGartland (who has since publicly disowned the film), and a movie that really wants to be Scorsese’s The Departed when it grows up.

There are bound to be more. For despite the recent murders of two British soldiers and a police officer (murders which all sides believe were spiteful and aberrant, rather than an ominous return to conflict), the relative peace of the new Northern Ireland has given artists and film-makers the creative leeway to examine the country’s painful past with impunity.

“There is definitely a greater openness that comes with the passing of time,” explains the writer and activist Danny Morrison, a former director of publicity for Sinn Féin, a former IRA member, and a spokesman for Bobby Sands at the time of the 1981 hunger strikes. “People are being encouraged to tell their side of the story. The only negative possibility is that we may become tired of it all. Although that doesn’t appear to be the case.”

Morrison adds, however, that the defining feature of movies about the Troubles, which can subsequently become a problem for those behind them, is that they are almost exclusively drawn from tales about the IRA. “Overwhelmingly, film-makers are attracted to stories about the Republican cause,” he says, citing a long list of movies, including everything from The Crying Game to James Cagney’s Shake Hands with the Devil, to John Ford’s The Informer. “It’s David and Goliath. You’re fighting the state. You’re the underdog, and people generally prefer the story of the underdog. I know it wouldn’t resonate well with victims of the IRA, but I believe an audience is much more receptive to that type of story. Which, for a film-maker, can mean being accused of making propaganda.”

Remarkably, Fred Cobain, the Chief Whip of the Ulster Unionist Party, is in complete agreement with Morrison. “Republicans represent the struggle of the small man fighting the big man,” he says. “Unionism, on the other hand, represents the Government. The Republicans are romanticised as being involved in some sort of human struggle against despotism, looking for democracy and freedom.” Cobain then adds the chilling rejoinder: “As someone who had a Republican gunman in his house one night, I can tell you there’s nothing romantic about it.”

Certainly, the IRA, as portrayed in Fifty Dead Men Walking, are straight out of the movie cliché rulebook. They are slick killers, denim-clad hipsters, tough-talking mobster leaders and they even count among their number a flame-haired Mata Hari type, played by the Hollywood starlet Rose McGowan; she casually seduces the hero McGartland (Jim Sturgess) before a bullet-ridden climax. These characters are direct descendants of the fiery Republican heavies played by Miranda Richardson and Adrian Dunbar in The Crying Game, or Natascha McElhone’s sassy super-operative Deirdre in Ronin, or a whole slew of compelling killers who have filled the cast list of populist movies such as The Devil’s Own, A Further Gesture and Patriot Games.

The Bobby Sands of Hunger, however, is the other kind of IRA protagonist. He is the introspective thinking man. He is the quiet, sensitive Stephen Rea in The Crying Game, the doe-eyed John Lynch in Cal, or even the tortured self-doubting Victor McLaglen in The Informer. These are men committed to their cause, but also deeply aware of their own humanity. Remember Rea’s Fergus in The Crying Game? He was utterly driven by feelings of guilt over a murder that he didn’t even commit.

Cobain says that he finds the lionisation of Sands especially hard to stomach. “Bobby Sands belonged to an organisation that incinerated innocent men, women and children,” he says. “And he is now held up as some sort of icon, and a martyr? If you’re a family who has lost a husband, wife or girlfriend to these people, how do you address that? How do you watch a film that says Bobby Sands was a martyr?”

Morrison, naturally, has a different appraisal of Hunger, and sees it as an example of the insights that movies might one day allow Northern Ireland to gain into the previous decades of dense political history. In particular, he says, the movie’s depiction of the violent and inhuman beatings suffered by inmates of the Maze prison in the 1970s has already had a profound impact. “At the time of the beatings, I was issuing four press statements a week describing prisoners with teeth knocked out, punctured ear drums, broken fingers and bleeding back-passages as a result of brutal internal searches,” he says. “But the authorities, the Government and 99 per cent of the media would not even accept that prisoners were being assaulted. Yet now, as a result of this one film, it is taken as read that this happened. ”

Impressive, yes. But with a tacit acknowledgement from both communities that the movies effectively belong to the IRA, the subsequent insights and revelations that they offer look likely to address only one side of the Troubles. The Protestant playwright Gary Mitchell (A Little World of Our Own) famously confirmed this when he announced: “I believe that there is a deep-rooted ignorance of the arts within loyalist communities. This is the reality I have always come across. That they do not trust drama. They will tell you coldly that drama belongs to the Catholics. Drama belongs to the nationalists.” (He was subsequently forced into hiding.)

Cobain sees no end to the dilemma. Though the temptation would be to hire some top-notch Hollywood scriptwriters to construct a modern movie mythology based around tormented yet slightly hip loyalist killers, he says that the answer is much simpler, and more decisive than that. “We need to draw a line under this and move on,” he says, warning that the backward-looking impulse of these movies, no matter how seriously profound, or how gloriously shallow, can bring nothing but misery to both sides of the divide.

“We can keep regurgitating these stories, but this community needs to go forward,” he says. “I don’t know anyone who has lived through this and isn’t sectarian, in a sense. But that’s a legacy that we’re hoping not to pass down to future generations. These movies are not part of the solution.”

The movie future he imagines is uncertain, and is perhaps filled with romantic comedies starring James Nesbitt, or musicals with Liam Neeson. But it is also unlikely. For despite the political gains made in the recent history of Northern Ireland, the gun-slinging underdog remains an irresistible iconic draw. Let’s just hope he remains on the screen and off the streets.