The Little Boy and The Fat Man 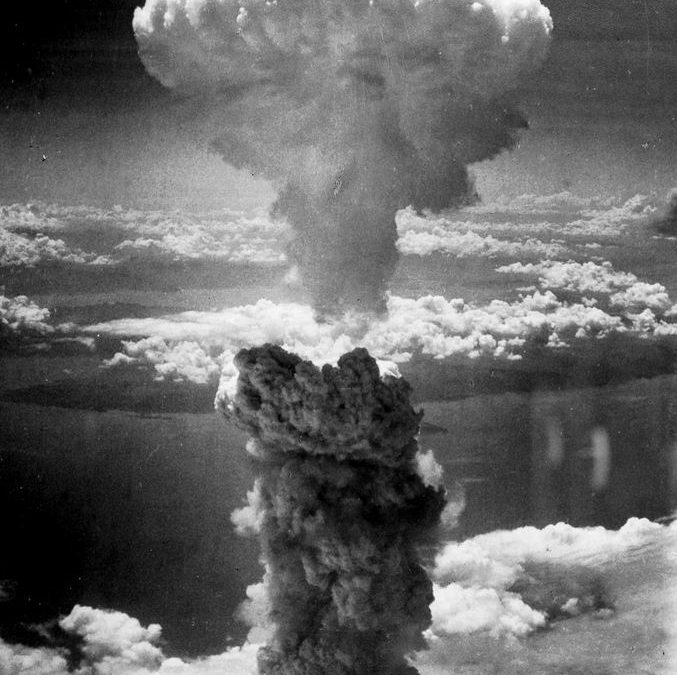 Today is the 75th anniversary of the dropping of the atom bomb over the city of Hiroshima, followed a few days later by the bombing of Nagasaki. This is a feature I wrote about the two bombings which was first published in 2004.

Charles Sweeney was born in Massachusetts, the son of a Catholic Irish-American plumber. Had he been Japanese he may well now have gone down in the book of infamy alongside Hitler, Stalin and bin Laden. Instead, because he was on the side of the victors he is defended as a saviour.

In the recent conflict in Ireland the protagonists caused much suffering and death, yet statistically all of that amounts to a tiny speck in comparison to the enormity of the fatalities in two World Wars. Even so there have been many instances here when someone involved in taking one life has expressed remorse, and been unable to live with themselves. A reflection on the grief they caused, major doubts about the ends having justified the means, a desire to be purged of guilt, will all have played a part in bringing the individual to an inner sense of right and wrong.

Over a period of a decade, perhaps up to a million innocent Vietnamese civilians were killed from the air by American B-52 bombers. But prior to September 11th, 2001, when three thousand innocent civilians were killed in the USA, the closest, other comparable terrorist incidents, in which there was huge loss of innocent civilian life, were the aerial bombings of Nagasaki and Hiroshima.

Setting the scene for those attacks were the allied bombing of Germany, justified along the lines that Germany was the first to bomb London and other towns. “The German people,” said Churchill, “will taste and gulp each month a sharper dose of the miseries they have showered upon mankind.”

From November 1940 onwards the RAF’s Bomber Command was instructed simply to aim at the centre of a city when dropping payloads. Hamburg – 50,000 deaths, 40,000 injuries, 1 million refugees in one night; Dresden – 135,000 deaths.  Sir Arthur Harris, Commander-in-Chief, Bomber Command, described the killing of German civilians as “a comparatively humane method” of saving the lives of British soldiers. 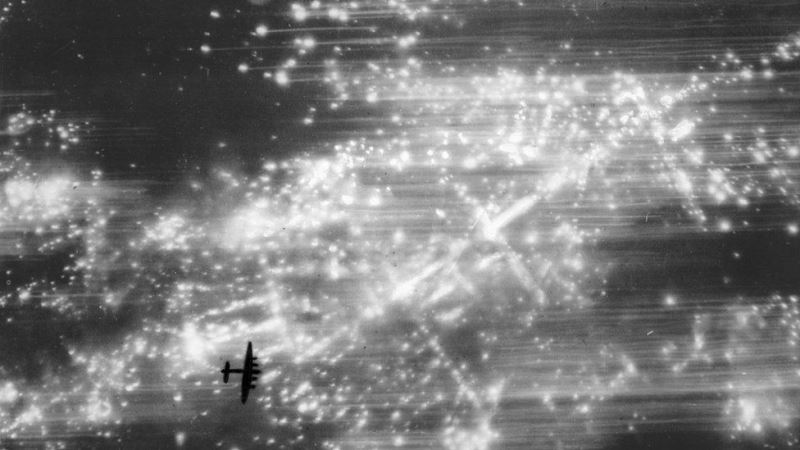 In 1942 a decision was taken by the British War Cabinet and the Air Staff to destroy all of Germany’s cities with populations over 100,000, targeting “the morale of the enemy civil population – in particular the industrial workers”. In July 1943, ‘Operation Gomorroah’, the RAF and the USAAF, killed over 50,000 civilians and wounded 180,000 more in Hamburg

Hitler instigated World War II and was responsible for the deaths of tens of millions, including six million Jews in the Holocaust. The Japanese entered the war as an ally of Hitler and their soldiers were incredibly cruel not only towards their opponents but towards civilians in conquered territories.

In May 1945 when Germany surrendered unconditionally attention then turned to the war in the Far East. At the same time, relations between the principal allies – the USA, Britain and Russia – were strained as it became clear that Russia intended consolidating the victories it had achieved at great sacrifice in Eastern Europe. It was also about to come into the war against Japan in occupied Manchuria.

One night in March 1945 the US dropped incendiaries on Tokyo and killed 80,000 people. By April Japan was helpless in the face of American naval and air power, her people starving. Most of her merchant fleet and navy had been sunk. An effective blockade had cut off her overseas army, and most of her air force was grounded.

The US was also aware that the new Japanese cabinet was making moves towards peace, but that it didn’t want to unconditionally surrender, didn’t want to be occupied and wanted to maintain their revered Emperor Hirohito.

The US – at great expense, $2 billion – had in 1945 developed and successfully tested the atom bomb, two of which were ready to be deployed. President Harry Truman took the decision to use these weapons of mass destruction against Japanese civilians and hasten the end of the war. The American public and American troops were certainly grateful that he did. 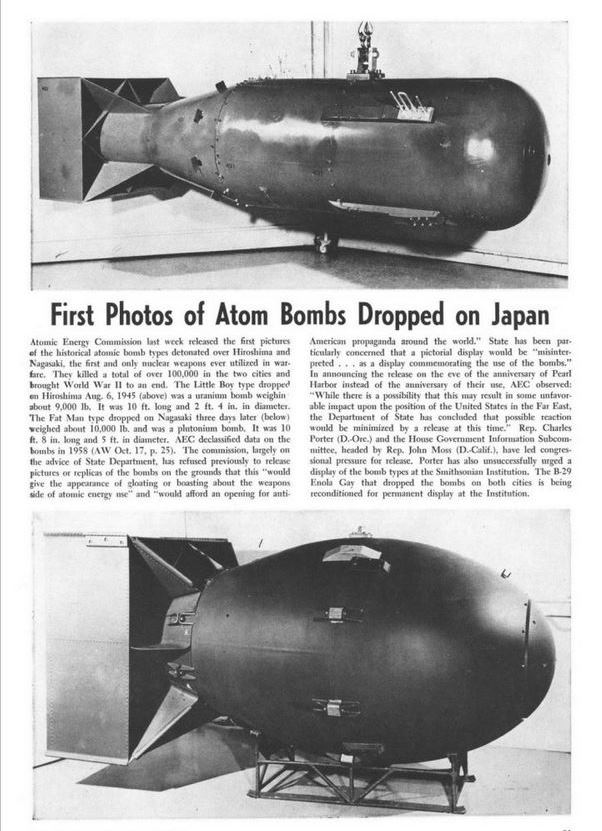 Before Japan had time to respond, Truman ordered another bombing, to give the impression that the US had a huge arsenal of atomic bombs. On this occasion, August 9th, 25-year-old Charles Sweeney, flew a B-29, and dropped a plutonium nuclear bomb, named ‘Fat Man’ (as a tribute to Winston Churchill), over the city of Nagasaki. Forty thousand children, women and men were melted or turned to ashes: another 45,000 died later from burns and radiation. 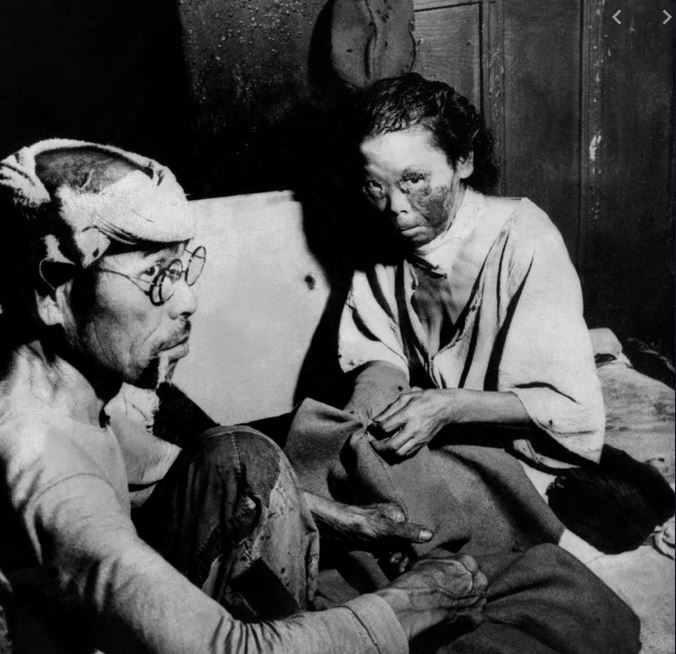 Truman described it as, “the greatest thing in history.”

Japan surrendered six days later. The United States justified the bombings by arguing that to have taken Japan by conventional force would have greatly multiplied the losses all round. Japanese troops viewed surrender as being a dishonourable act and would fight to the death. For example, when US marines landed on Okinawa a few months earlier they had met fierce resistance. They lost 12,000 men: the Japanese, 100,000 soldiers and 70,000 civilians. The US reckoned that to take the next major island, Kyushu, may have led to the loss of up to a quarter of a million of their own men alone.

Not everyone agreed. Fleet Admiral William Leahy, Chair of the Joint Chiefs of Staff, said: “It is my opinion that the use of this barbarous weapon at Hiroshima and Nagasaki was of no material assistance in our war against Japan. The Japanese were almost defeated and ready to surrender… In being the first to use it, we adopted an ethical standard common to the barbarians of the Dark Ages.”

Undoubtedly, the decision to use the two atomic bombs was also aimed at chastening Russia in the Cold War which had just begun.

Both Charles Sweeney and Paul Tibbets had no regrets. A few weeks after the war ended, Sweeney returned to the scene of the crime, Nagasaki, with Tibbets. “I took no pride or pleasure then, nor do I take any now, in the brutality of war, whether suffered by my people or those of another nation,” he wrote. “Every life is precious. But I felt no remorse or guilt that I had bombed the city where I stood.”

No remorse or guilt. What a frightening indictment of humanity’s inhumanity. Sweeney died last week, aged 84, a retired Air Force general. He lived a happy, unperturbed life and was buried after Requiem Mass last Tuesday.

Witnessing the Japanese signing the instruments of surrender, General Douglas MacArthur said: “Let us pray that peace be now restored to the world and that God preserve it always.”