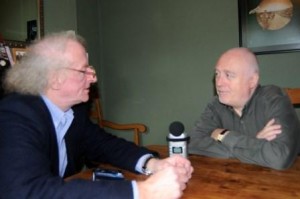 For thirty years Downtown Radio’s Bobbie Hanvey has been presenting his weekly show, ‘The Ramblin’ Man’, and has interviewed the great and the good. This Sunday night [10pm-10.30pm] the tables are turned on Bobbie as he comes under scrutiny from Danny Morrison. [Only available on Medium Wave, Belfast region, and FM west of the Bann.]

Bobbie was born in Brookeborough, Co Fermanagh, and has lived in Downpatrick since 1966. His autobiography, ‘The Mental’, charts his time as a psychiatric nurse in the Downshire hospital.

Bobbie is also one of Ireland’s leading photographers. His first photographic book, ‘Merely Players’, presents a stunning array of portraits taken over the past thirty years of poets, playwrights, republican activists, loyalist paramilitaries, priests and politicians. They include Seamus Heaney, Brian Friel, David Hammond, Gerry Adams, Danny Morrison and Sammy Duddy, to mention but a few.