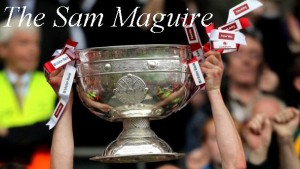 Yesterday, we were in Croke Park for the all-Ireland. Down weren’t up to it and although Cork beat them by only one point, the margin of victory could have been much greater but for this and that. Cork 0-16: Down 0-15.

Nevertheless, one of the best days out for a person who was born in or lives in Ireland, or has made Ireland one’s home. The best book ever on the GAA is Tom Humphries’ Green Fields.  Should be compulsory reading for kids.

Feature on memory published in today’s edition of Andersonstown News.

17th September. At opening night of ‘Stormont’, a satire by Sean Crummey, in Theatre at the Mill, Newtownabbey. Though the plot was based on a very tenuous premise (a hostage-taking situation in Stormont involving as victims, Ministers Gerry Kelly and Michael McGimpsey, by environmentalists) the audience loved it and Sean Crummey as Kelly and McGimpsey was brilliant.

Was interviewed by post-graduation student Joanna Cordeiro from Brazil who is researching the influence of international events on the peace process.

Wrote a feature for the ‘Andersonstown News’ on the subject of memory.

13th September. Went to see ‘A Night With George’ in the Opera House starring actress Donna O’Connor which she co-wrote with Brenda Murphy. It was hilarious and great to see Donna (who used to work at Féile an Phobail) take so confidently to the big stage. At first I was worried that it was going to be one long moan about the life of a republican prisoner’s wife but in the second half the narrative really took off and Donna was in her element and got a standing ovation!

12th September. Finished ‘The Paris Review Interviews Vol. III’. What a great series for readers and writers alike. And I have started Vol. IV – what am I going to do when I have finished it. Am also reading the Steig Larsson books and a little gem, GK Chesterton’s autobiography picked up for 25p at the weekly Sunday car boot sale in the Kennedy Centre car park!

10th September. Went to QFT to see Copie Conforme (Certified Copy) starring Juliette Binoche and William Shimell, one of the most pedestrian and pretentious films we have seen in years, or, as Leslie dubbed it, Certified Crap. Sitting next to us was Anne Devlin, the writer, and her husband, who really liked the film. Made the mistake of asking Anne had she seen that other crap film The White Ribbon but she loved it as well. Clearly, I am missing the film gene.

6th September. Interviewed by Padraic McGeever for his thesis, ‘the armalite and ballot box strategy of the Provisional movement from 1981-1994’.

24th August. Interviewed by Philippe Duhart, a doctoral student at UCLA, whose research focuses on the peace processes in Ireland and the Basque Country, “with a specific focus on the decision-making within the movements in light of state repression.”