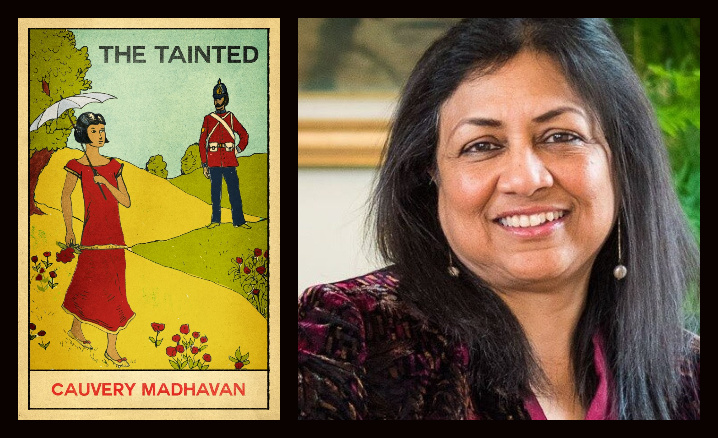 Cauvery Madhavan’s third novel transports us to India, 1920, and life for British soldiers based in the Nandagiri hillside station, in writing evocative of the prose of Paul Scott’s Raj Quartet. Oppressive heat, languorous days, the beauty and effulgent colour of landscape. Tiger hunts and games of polo for the officers. Exotic scents and fragrances, the land throbbing with life and promise, but society riven by cast and prejudice, a people trying to cope with imperial subjugation and humiliation.

The British Army also faces a pervasive existential threat from dysentery, cholera, rabies, snake and mosquito bites which have previously taken the lives of twenty-seven of its soldiers.

In June 1920 the British Army’s Connaught Rangers in India mutinied in protest at news of the Black and Tans’ reign of terror in Ireland. Seventy seven were subsequently imprisoned and one, Private James Daly, was executed as the main culprit.

The Tainted shadows that story with a mutiny by the fictional Kildare Rangers and the repercussions of that incident on the life of Rose Twomey who falls pregnant to the doomed Private Michael Flaherty; and, in Part Two, on that of Rose’s granddaughter May Twomey and a suitor Richard Aylmer six decades later.

Rose’s mother Evie (May’s great grandmother) was born in the Military Asylum for Orphan Girls, the illegitimate child of a British soldier (a ‘half-caste’) and was bequeathed an Irish surname when she was picked by ex-soldier Sean Twomey for marriage because she was ‘light-coloured’. Twomey, upon completing military service, had decided to stay on in India, provisioning the troops as their ‘bacon wallah’. He never returns to Ireland and after his wife’s premature death raises Rose, who is imbued with stories of County Cork and has pipedreams of going ‘home’ to Glengariff, to a country she has never seen. But where ‘home’ is for any of the characters is elusive and problematical.

Rose becomes a maid and nanny in the household of Charles Aylmer, the Commanding Officer of the Kildares. There, she falls in love with Private Flaherty, batman to Aylmer.

On the night in 1920 when Rose falls pregnant she and Michael Flaherty are visiting Madras when disturbances break out as rumours spread that Gandhi is about to be arrested.

A little later the Kildare Rangers mutiny, Michael is arrested, and the disgraced Rose, unmarried, pregnant and dismissed from the Aylmer household, is practically disowned by her father. She gives birth to a son but tries to commit suicide and ends up in an asylum. We later hear that she is dead.

In 1982 Richard Aylmer, an accomplished landscape photographer, the grandson of the Commander of the Kildares, arrives at Nandagiri to photograph the same scenes his grandfather painted in water colours during his posting, and is staying with Mohan Kumar, an Indian civil servant and a rival for the heart of May.

Through conversations and Rose’s old diary the story is deftly pieced together. It is about much more than romance and courtship but the immanence of racism and class which infects even the enslaved, poisons relationships, and which generations later still plays out as native deference and Anglophilia despite the depredations and sins of the empire.

Even the sympathetic regimental chaplain of the Kildares, Father Jerome, is a racist, believing that Anglo-Indian women like Rose deserve the disdain with which they are treated, while Rose herself looks down on the Indians: “It is our good manners that separate us from the natives – that and cleanliness and honesty.”

Richard Aylmer, Anglo-Irish, of planter stock, was born in a ‘big house’ in County Kildare which has been served by generations of Private Flaherty’s family as maids and manservants. One moment he declares he is Irish and blames the English on Ireland’s woes only later ruefully to say, “We’re still Anglo-Irish. Not Irish enough.”

That almost echoes young May’s statement: “We’re tainted – we were never white enough then and will never be brown enough now.”

The tainted people refers to the Anglo-Indians (stuck in India but pining for that illusive home in Britain or Ireland – where they were largely unwanted), the Anglo-Irish (who despite the passage of centuries feel despised, rejected and apart), and those demobbed soldiers of Irish regiments post-1916 who were shunned for serving England when they returned to an Ireland in the midst of revolution.

When I thought the story was over, it wasn’t. And the twist in the final pages takes one completely by surprise, a revelation both sad and an occasion for rejoice, but a reminder of the deformed values that create division and suffering.