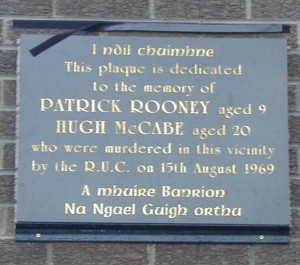 13th March. Interviewed by BBC Radio Ulster about Radio Free Belfast in August 1969, and what effect the pogroms had on my life.

11th March. Finished ‘Numbers in the Dark’ by Italo Calvino. Liked ‘Dry River’, ‘Like a Flight of Ducks’ and ‘Beheading The Heads’, but others, like ‘The Queen’s Necklace’, start out promising but then fail to live up to the expectation. In the past I read ‘Adam, One Afternoon’, ‘Six Memos for the Next Millenium’ and ‘Why Read The Classics’.

Bought ‘Pig Earth’ by John Berger in the Oxfam Shop on Botanic Avenue – a little treasure of a shop, well run, well organised, that used to be located on the Dublin Road.

9th March. ‘The Guardian’ phoned asking if I would like to write an opinion feature on the RIRA killing on Saturday night of two British soldiers. Decline and explained that I no longer do political commentary – only interviews with students or historical stuff. Sky News and Newsnight also phoned. Also declined.

Began reading ‘The Glass Bead Game’ by Hermann Hesse which I got in the Linenhall Library last Friday.

7th March. Received email from a Michael Snyder of the University of Oklahoma who came across two pieces I wrote about James Leo Herlihy, author of ‘Midnight Cowboy’. He is writing a study of his fiction and plays and noticed that in a December post on my website I mentioned an obituary in ‘The Guardian’ that said Herlihy died of an intentional overdose in a motel.  But in an earlier post from October I wrote that he shot himself in his LA flat. Michael had heard rumours of Herlihy shooting himself, despite the official story. I went through my old notebooks [ones from my time in jail] and came across this comment: “Guardian, 1 Nov 1993 – death notice – ‘has committed suicide at his Los Angeles flat at the at the age of 66.’” I had no idea where I got the notion that Herlihy shot himself so I presume it was a mistake or that I subconsciously picked it up from another article, radio or television feature by someone else who was also mistaken. It wouldn’t be the first time that had happened, I explained to Michael.

4th March. Interviewed by Chloe Canton, a student from Brittany who first interviewed me in 2006 while she was preparing her first year Masters’ essay about representations of Ireland conflict in movies. This time she wanted to interview me about the hunger strike and current developments in the peace process.

3rd March. Interviewed by mature student Rory Finegan from the South. His MA is looking at the issue of targeted assassinations and what effect if any do they have in bringing a revolutionary organisation along the road to engaging in politics and moving away from militant methods.

Interview I did some months ago for UTV’s light-hearted documentary on the production of drinks such as whiskey and poteen, ‘It’s In Our Spirit’, was broadcast tonight but I missed it as no one alerted me. I had recommended they use Bobby Sands’ song ‘McIlhatton’ but I don’t know if they did.