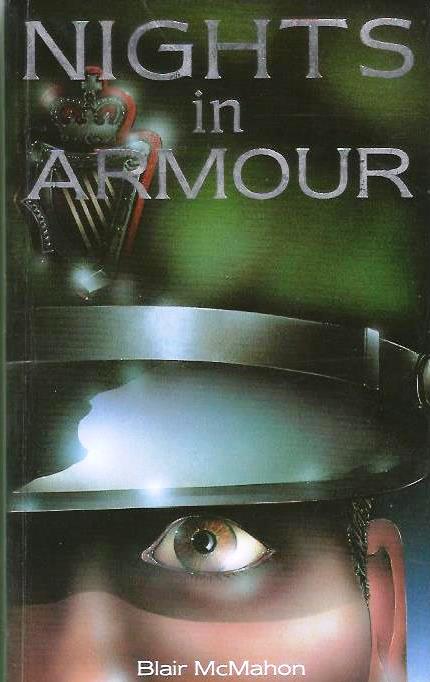 I’ve just finished a very good book, Nights in Armour by Blair McMahon, written in the main from the perspective of several RUC men around the time of the hunger strikes and the death of Bobby Sands. There are other minor points of view, including that of a republican prisoner, but they don’t ring with verisimilitude or have the same power as the scenes of barrack life or convey the tension and raw fear of patrolling a republican heartland.

I was surprised to learn that it was published as long ago as 1993 because I had never heard of the book before. Nor does it appear to be mentioned in any of the collections of what is loosely termed ‘Troubles literature’; nor does it appear to have been reviewed in the mainstream media. There has long been a snobbery towards novels released through small, informal publishing houses and Nights in Armour was released through the since defunct Ulster Society based in Lurgan. Furthermore, Blair McMahon is a nom de plume (or nom de guerre) as he was a serving RUC officer at the time of publication and thus for personal security reasons unable to promote the book through interviews or public appearances.

Presumably the real author’s loyalties remain tied to his upbringing, his hearth and home and with former comrades, yet to his credit those ties have not circumscribed or restricted his depiction of character and their prejudices, and what we get is the flawed, honest human being behind the gun and uniform; the crutch of masculinity, the broken marriages and relationships, the suicides, the alcohol-dependency, the rivalries, the guilt, the camaraderie.

One Catholic policeman who is moved into the section is nicknamed ‘the token mick’. Another colleague, a police woman, ‘Diana Death’, is a weirdo of a necrophile who likes to be first on the scene after a killing so that she can take photographs for her personal collection.

About the death of one RUC officer we get this simple, yet profound statement: “Colin McKnight is gone. He exists in old family photographs and the fading memories of friends.”

Despite my having diametrically opposite experiences of some of the scenarios McMahon describes – including attacks on republican funerals – the novel does not read as propaganda.

It is an unvarnished view of what makes an RUC man tick. There is brutality, ugliness and hatred, and humour and love. Some of the detailed descriptions of the aftermath of a booby-trap bombing or a shooting are appalling and not for the squeamish.

The character we are drawn to most is Reid, an anti-hero, a natural leader of men who is fearless under fire and who is determined to see off the threat from the IRA, to outlive them. This passage below is, incidentally, reminiscent of the grim city also brilliantly portrayed by Eoin McNamee in his novel, Resurrection Man, published in 1994, a year after Nights in Armour:

‘Night. To Reid, it seemed the only time to do policework. The science became pure. He had no annoying despatches to deliver: no silly calls to people locked out of their cars or children annoying neighbours. At night a different breed of person walked the streets. Main thoroughfares and pedestrian zones which bustled with shoppers during the day, became no-go areas at night; people passed through them quickly and only if they had to. Burglars moved invisibly; car thieves hid in the shadows. Drunks, prostitutes and gunmen all took to the streets and claimed them as their own. Things happened…

‘Reid loved to prowl the empty streets, searching for the thieves and thugs who made life a nightmare for others. He wanted to balance the scales, pay something back to those who stole and brutalised with such casual indifference. Instead, he sat in the back of a police car listening…Retribution would have to wait.’

The flaws in the novel are minor in comparison to the good writing.

Every republican my age has come across the delusional cop or screw who’ll genuinely tell you about how great things were in the “wee Pravince” before the IRA came along. Such a ‘Leonard Sachs’ actually does appear in the book with that view, reminiscing about that mythical era, belief in which persists among many unionists and which bedevils us ever agreeing on the past: “the good old days, a golden age that ended forever in August 1969” before which “Northern Ireland had been one of the most peaceful, law-abiding societies in Europe. A few weeks later, troops with fixed bayonets maintained order in smouldering streets. What went wrong?”

There has been a dearth of good fiction writing from the unionist perspective and Nights in Armour is a welcome addition to the canon (if you’ll excuse the phrase).

The depiction of unionism/loyalism on stage and on screen hasn’t been an entirely flattering one either.

I remember an angry Billy Hutchinson at a discussion after a staging of the play The Chronicles of Long Kesh express frustration at the way loyalists in particular were presented in drama, literature and film, as “going around like Neanderthals trailing their knuckles on the ground”.

Playwright Gary Mitchell (from Rathcoole, from where he and his family were eventually evicted by angry loyalists) has said that, “There is a deep-rooted ignorance of the arts within loyalist communities…They do not trust drama. They will tell you coldly that drama belongs to the Catholics. Drama belongs to the nationalists.”

Fred Cobain, former chief whip of the Ulster Unionist Party, once said: “Republicans represent the struggle of the small man fighting the big man. Unionism, on the other hand, represents the government. The republicans are romanticised as being involved in some sort of human rights struggle against despotism, looking for democracy and freedom.”

The veteran journalist David McKittrick once wrote a feature for the London Independent titled, ‘Why are all the Troubles’ films about republicans?’ He said: “…few writers or producers – inside or outside Northern Ireland – find the Protestant community interesting, few identify with it and few have sought to champion it or even express its concerns. As a result republicans have basically had the big screen pretty much to themselves…

“The perceived Protestant narrative, however, is one of a reactionary frontier community grimly holding on and opposing change… they find the republicans intriguing but the Protestants problematic.”

That may be so, but there are many stories still to be told – and from all sides; personal experiences to be rendered through fiction or drama to universal appeal and empathy; stories which can open our eyes to polar opposites, to help us see things and people as they are, from their perspective, which will take us out of our comfort zone and into another’s land.