Trapped By His Own Words 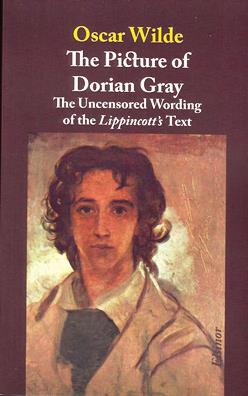 Earlier this year I was asked by my German translator, Jörg Rademacher, if I would write the introduction to his translation and annotation of the original version of The Picture of Dorian Gray, the version used in court to ridicule and indict him by Edward Carson. The book has now been published in Germany and here is the piece I wrote, Trapped By His Own Words:

Oscar Wilde died twice. Of course his final resting place was in Père Lachaise, Paris, where he had succumbed to meningitis in 1900. But he had already died in London, his spirit crushed by a prison sentence of two years hard labour (1895-97) on a charge of gross indecency, this humiliation, this downfall having destroyed the brilliant, flamboyant Anglo-Irish writer.

Unwittingly, Wilde had forged some of the nails for his own coffin, in his own hand, by his own words, when he submitted the manuscript of The Portrait of Dorian Gray to the American publication, Lippincott’s Monthly Magazine, in June 1890. In this first version homosexual themes border on the explicit. But the second version, the British-published book of 1891, was a more circumspectly crafted text and included a Preface which attempted to negotiate his way around the initial criticisms that Dorian Gray was scandalous and immoral. Damaging quotes from the Lippincott’s version, along with compromising letters, and the prospect of testimony from young male prostitutes, would later be used against Wilde in court by Edward Carson to discredit him and pave the way for his prosecution on charges of committing indecent acts.

Carson, like Wilde, a Protestant Dubliner and former fellow of Trinity College, was the leading barrister of his era. He was not only Wilde’s Nemesis but, later, when he rose to political prominence, that of Irish nationalists. What a contrast between the lives of Wilde and Carson! One, a gifted artist who would hardly hurt a fly and who brought joy to thousands of readers and theatregoers and who would, after his death, be exonerated; the other, a skilled lawyer and consummate politician who would engage in illegal activity, threaten the will of parliament and bring immense suffering to the Irish nation, the repercussions of which are still felt today.

From 1911 Edward Carson became involved in subversion against the British government, opposed democratic Home Rule for Ireland, helped raise an illegal, paramilitary army (armed from Germany) and threatened civil war – all with impunity! When the First World War broke out, Carson’s (Protestant) Ulster Volunteer Force largely converted into the British army’s 36th (Ulster) Division; Carson became British Attorney General, a member of the War Cabinet and First Lord of the Admiralty. He was to symbolize the partition of Ireland, the man who sabotaged his country’s independence.

Dorian Gray is the story of a young man selling his soul in a Faustian pact in exchange for eternal youth. The plot is quite staid: “all conversation and no action”, as Wilde described it. Overtly, it is a novel of ideas about aesthetics, and the relation of passion to art. Wilde, a married family man but a practicing, covert homosexual for the four years prior to 1891, could not but help use his art to promulgate his ideas.

Those ideas (that it is right – healthier and cathartic – to give into temptations of the flesh) certainly aren’t as monstrous as that suggested by Dostoyevsky’s Smerdyakov’s character, that “Everything is permitted”, but they did outrage the Victorian establishment, Wilde’s enemies and jealous critics. Wilde’s unique wit, his affectation of speech, manner and eccentricity of dress, which was often ridiculed, incensed this section of society, the philistine majority, who allegedly practiced self-denial, and who viewed him as immoral and degenerate, but lacked the opportunity to humble and humiliate him.

It was a combination of Wilde’s own hubris, and the encouragement of his lover, which set the scene.

One of those who read and was beguiled by Dorian Gray was Lord Alfred Douglas, a handsome young man, nicknamed ‘Bosie’, a spoilt and self-indulgent brat. He and Wilde were introduced in June 1891 and thereafter began an affair, often acting quite incautiously, though it was Alfred who was reckless and publicly flaunted himself so that they would be recognized as ‘Oscar Wilde and his boy’. Alfred’s father, the Marquess of Queensberry, was outraged at what he considered was the corrupting of this son (though it was actually Alfred who introduced Wilde to the subterranean world of male prostitution), and when Wilde was challenged by Queensberry in June 1894 he denied the allegations. But in February 1895 the Marquess threw down the gauntlet in the form of a calling card left in Wilde’s club, basically publicly accusing him of being a sodomite. Against wiser counsels, Wilde sued and Queensberry was arrested and charged with criminal libel.

However, during the trial, which began on 3rd April 1895, the tables were turned and Edward Carson, who was brilliant, eloquent and forensic in regard to highlighting ‘immorality’ in Wilde’s work, including the Lippincott’s version of Dorian Gray, easily demonstrated Wilde’s licentious life and that he had an insatiable sexual appetite and predilection for young men. When Carson announced that he would produce male prostitutes as his witnesses who would testify to have having had sex with Wilde, Wilde dropped the prosecution. Not only did the court costs bankrupt him but the court ruled that the accusation that he was a sodomite was ‘true in substance and in fact’, and this triggered the next stage of the tragedy – his arrest on twenty-five counts of gross indecencies and conspiracy to commit gross indecencies.

His first trial ended with the jury unable to reach a verdict.

(To be fair, at this stage Edward Carson appealed to the Solicitor General for clemency but was told it was too late as the case was now “too politicized” to stop. This is a reference to speculation that the British Prime Minister, the Earl of Rosebery, had had a homosexual affair and was being threatened with exposure if he failed to aggressively prosecute Wilde.)

At the second trial, in May 1895, which heard lurid details and allegations of hotel sex with male prostitutes, Wilde and his co-accused, Alfred Taylor, were convicted of gross indecency and sentenced to two years’ hard labour.

Imprisonment broke Wilde. He experienced hunger, insomnia, disease, bouts of dysentery, loneliness, desertion, and the death of his mother. When being transferred in prison stripes to Reading Gaol a crowd gathered around him on the railway platform and jeered and spat at him. He wrote that he knew that when he would be released from prison that there was “nothing before me but a life of a pariah – of disgrace and penury and contempt.”

His tragedy was the second occasion within a few years of a prominent Irish figure being brought down on the issue of morality. Charles Stewart Parnell, the greatest Irish politician of his era, was leader of the Irish Parliamentary Party at Westminster and appeared to be on the verge of achieving a measure of Home Rule (the Second Home Rule Bill). But, in 1890, in a London divorce case Parnell was named as co-respondent, as living with another man’s wife with whom he had two children. The subsequent fallout from the scandal especially in Catholic Ireland, destroyed Parnell and bitterly divided his party. Meantime, others had become disillusioned with the failure of constitutional politics to deliver and were to go down the separatist road which would eventually lead to the 1916 Easter Rising and the formation of the IRA. Although the Irish Parliamentary Party had recovered by 1900 and looked again as if its lobbying at Westminster would finally result in the passing of a Home Rule Act, onto the stage strode Sir Edward Carson to thwart their Irish aspirations.

Wilde was released in May 1897 and immediately went into exile, unaware that history and public opinion would exonerate him.  His writings are celebrated, his plays constantly performed and attract new admirers, his life the object of biographers, and his epigrams (used to blacken him at this trial) regularly quoted in books, in film and in the media. In Ireland and Britain today homosexuality has been decriminalized and gay partnerships/marriages are recognized. In another ironic twist, the newspaper symbolic of Rupert Murdoch’s modern global media empire, the News of the World, which throughout its 168-year-old history specialized in scandal, salacious stories and prurience, and which rejoiced in Wilde’s imprisonment and downfall, itself was brought down by scandal in 2011 and court cases! Police revealed that the newspaper was involved in widespread phone hacking of royal, public and celebrity figures, of the families of soldiers killed in Afghanistan and of the families of teenage girls who had been raped and murdered.

Against this history, in hindsight, who truly was the more moral but Saint Oscar?

Dr Jörg Rademacher, in as forensically a manner as Carson indicted Wilde, liberates Wilde from the censuring  and self-censorship Wilde himself, for motives of self-protection, futilely wrought on his novel in the various stages of production. Rademacher, as he explains, distills the variant texts to produce a new edition of the old but original Dorian, a reconstruction of the uncensored wording of The Picture of Dorian Gray.

It presents us with a unique insight into the parturition of a work, the struggle that takes place between true, unencumbered, artistic freedom and powerful social forces which compromise such work – for better or worse, but rarely for better.