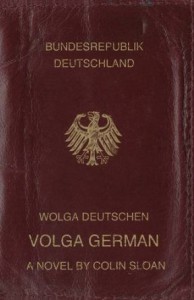 Finished a wonderful, first novel, Volga German by Colin Sloan. Ingenious, imaginative and exceptionally well-written, it is the story of Andreas Mensche, one of those ethnic Germans living in the USSR in the River Volga region since the 18th century preserving their German culture and traditions. When Germany invaded Russia Stalin ordered the dispossession of the 440,000 Volga Germans (officially declared ‘enemies of the state’) and their mass transportation to the east, including Siberia, where many died doing forced labour.

Another character is Liam Broy from Dublin and a former soldier in the Irish Defence Forces who served in Lebanon. He is befriended by Andreas and the two reflect upon their lives in war and the cost of conflict and the inescapability from the past. I cannot emphasise enough how impressive this book is!

4th March. Interviewed by Jan Freytag, a PhD student at Ruhr-University-Bochum, Germany, who is researching the prison protests, 1976-1981, and the mediation attempts of the Catholic clergy.

3rd March. Addressed a Bahraini Delegation (including human rights groups) at Stormont with Jeffrey Donaldson MP on the lessons of conflict and the history of the peace process here. Event organised by the Causeway Institute.

28th February. Interviewed on the Nolan Show for the second time this week on the political fall-out from the John Downey case.

27th February. Interviewed by BBC Radio 4’s John Humphrys, and by UTV Live, in relation to the release of John Downey and the political ramifications.

26th February. Interviewed on Radio Ulster’s Nolan Show and on Radio Foyle about the release of John Downey yesterday and the collapse of the case against him in London in relation to his status as an ‘On The Run’ in receipt of a letter stating that he was not wanted for any offence.

25th February. Attended launch in the Department of Justice and Equality in Dublin of Sean McConville’s monumental work (ten years in the writing) Irish Political Prisoners, 1920-1962, Pilgrimage of Desolation. Great to meet at last, Donal Donnelly, who escaped from Crumlin Road Jail in 1960 and who later recounted that story in his book, Prisoner 1082, Escape From Crumlin Road – Europe’s Alcatraz.

17th February. Interviewed on Radio Ulster’s Nolan Show about the campaign by Celtic fans to put the song by the Irish Brigade, ‘Roll of Honour’ about the hunger strikers, into the charts in protest against the Offensive Behaviour At Football  Act in Scotland.

12th February. On the 25th anniversary of the British government assassination of human rights lawyer Pat Finucane, I attended a lecture in his memory by Justice Seamus Treacy. The title of the lecture, held in Larmour Lecture Theatre, QUB, was ‘Pat Finucane: Legacy or Continuum?’ The event was jointly hosted by human rights NGO, Committee on the Administration of Justice and Queen’s University Law School.

3rd February. Interviewed by Tim McGarry for BBC television documentary – ‘They Think It’s All Over’ – looking back at the history of discrimination in the North.

6th February. Finished my introduction for Jörg Rademacher’s new German translation of Oscar Wilde’s The Picture of Dorian Gray, due out this summer.

27th January. Interviewed by Nicholas Kenney, a PhD student from Boston, one of whose case studies is ‘Northern Ireland 1968-1975’.