Walked Off To Look For America 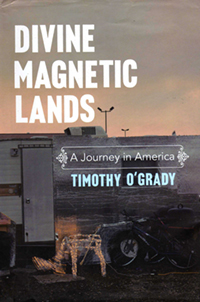 Down the years my friend Tim O’Grady has been very good to me. He visited me in jail, wrote to me and sent me books, wrote a piece for ‘The Guardian’ about my court case which was rejected at the time; introduced me to the writings of John Berger and Richard Wright; was there at Heathrow Airport to greet me the first time I visited England after being excluded for 14 years under the Prevention of Terrorism Act; persuaded the editor of Lillitput Press to include a chapter by me in ‘My Generation’ [1996], a book of musical reminiscences; got me a bit-part in a film based on his book, ‘I Could Read The Sky’, along with Stephen Rea and Pat McCabe, filmed in Hastings; introduced me to Sinead O’Connor and John Minihan [who took the famous picture of Beckett putting out a cigarette in Le Petit Café, Paris] and who took a ‘Butch Cassidy and the Sundance Kid’ pic of Tim and I cycling down Masbro Road with hangovers; and came all the way from Valencia to my wedding in Andersonstown in 1999 [carrying an extremely heavy, engraved tile which to this day hangs on the wall of our dining room] and read from an Apache Wedding Blessing.

Yes, Tim is a true brother.

Last year I read Tim’s travelogue of the USA which was published in hardback in 2008 and paperback a few months ago. The title of his book is from a Walt Whitman quote: ‘Divine, Magnetic Lands’.

It is a fine book about love of his native land, the United States of America. It is also about humanity, things he learns about his late father, about writers and poets, in his reassessment of the America that he left in 1973. I made notes along the margins in pencil and here comment on some.

Tim confesses that as a youth he only knew Catholics, served Mass and was a member of the Future Priests’ Club – something he never confessed to me, even at five in the morning when after being thrown out of his local little Jazz Club in Hammersmith both of us would sit on opposite sofas looking into diminishing glasses of dark elixir and confessing to things that had begot us.

Though Tim’s grandfather or great grandfather hails from Cork and Tim has a gra for Ireland he reassesses the America he left for Europe and revisits the city of his birth, Chicago. About the South Side, Henry Miller wrote: “Reminds me of a diseased jawbone, some of it smashed and pulverized, some of it charred and ulcerated.” The South Side is also home to Louis Farrakhan’s Nation of Islam national headquarters.

‘The road is life,” wrote Jack Kerouac whose book provides Tim with motivation, though my copy still sits unread on the same pile in my study three years after I bought it.

‘Divine, Magnetic Lands’ is full of allusions and nuggets, such as G.K. Chesterton’s comment in 1931: “There is nothing wrong with Americans except their ideals. The real American is all right; it is the ideal American who is all wrong.” Or, William Burroughs’ description of a paranoid as “someone in full possession of the facts.” Or Simone de Beauvoir’s extraordinarily prescient remarks from 1947 as she looked out towards the Manhattan skyline and thought, “What a field day a bomber would have!”

There are facts and figures including that there are a million lawyers in the US – one for every 280 people.

Tim can also be very funny. He switched on the radio one morning and notes: “I woke to the news that Conan the Barbarian had been elected Governor of California.”

In Mississippi, referring to slavery, a liquor-store owner tells him: “I can’t keep paying for things my great grandfather did”, without realising that he does and that we do.

Tim meets Jill Cutler, who had been his boss when he was teaching at Yale, a woman who had been once or twice propositioned by Bob Dylan but had turned him down. Imagine that. Even I would have lain across his big brass bed. She was now writing a biography of her body through the clothes she had put on it.

He meets people like William Kennedy whose books I love. I remember my friend the late Siobhan O’Hanlon, Gerry Adams’s secretary, as an afterthought one night when her and her partner Pat and my partner Leslie and I were having dinner, her saying, “I was thinking that we should have invited you along.” This was in reference to the entourage that had accompanied President Bill Clinton during a visit to the North.

“There was this writer, William Kennedy, there whom you might have wanted to talk to.”

I couldn’t believe it! William Kennedy was here and I never got a chance to meet him.

About Kennedy, Tim says: “I can think of no other city of comparable size with a chronicler so knowledgeable, so inclusive and so artful.”

He interviews Studs Terkel [who died last October]. At the age of 14 Studs saw Lucy Parsons, widow of Albert Parsons. He was one of the Haymarket Martyrs who was executed for his part in a demonstration in Chicago in 1886 protesting for an eight-hour day. During the demonstration a policeman was killed by an unidentified bomber [possibly an agent provocateur]. Eight leaders of the demonstration were executed and the world’s May Day celebrations were established to commemorate the Haymarket Martyrs.

Tim meets a man in a bar who brags that he had “sixty-two registered kills in Vietnam.”

A man in the Rockies tells Tim that “Guns are popular out here. There are people in the wilderness with arsenals in their houses waiting for the black helicopters of the United Nations to invade” This reminded me of Martin Fletcher’s comments in his US travel book, ‘Almost Heaven’ (1999). Fletcher interviewed members of the apocalyptic movements and ‘covenant communities’, tax resisters who hate federal government and who have fled “a civilisation they consider doomed” and gone to live in the mountains. Some of these people believe that the government is planning to implant microchips in the brains of the population so that it can monitor what people think and do. Others believe that it has already planted computer chips in road signs, enabling it to keep tabs on all its citizens. He was also told that a group of tremendously wealthy Jewish-led international bankers – known as the Illuminati (chaired by the Queen Elizabeth II!) – are surreptitiously taking over the world; that the government knows how to produce free energy and make cars run on water, but were suppressing these technologies because oil was a means of control; and that the government itself bombed the federal building in Oklahoma in order to blame and discredit the militias.

One of the saddest pieces in the book is a quote from Chief Seattle, a speech he made before the governor of the Washington Territory in 1853, about the transience of any one tribe:

“It matters little where we pass the remnant of our days. They will not be many. The Indian’s night promises to be dark… A few more moons. A few more winters – and not one of the descendants of the mighty hosts that once moved over this land…will remain to mourn over the graves of a people – once more powerful and hopeful than yours. But why should I mourn at the untimely fate of my people. Tribe follows tribe, nation follows nation, like the waves of the sea. It is the order of nature, and regret is useless. Your time may be distant, but it will surely come, for even the white man whose God walked and talked with him as a friend, cannot be exempt from the common destiny. We may be brothers after all. We will see.”

‘Divine, Magnetic Lands’ is a wonderful book about a seriously flawed but wonderful country.