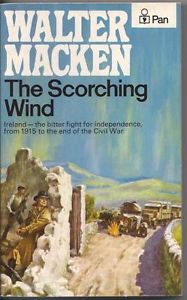 Recently, An Phoblacht published a feature by Robert Allen about the writer Walter Macken who died in 1967 at the age of fifty-one, who has been described by the Connaught Tribune as “Galway’s neglected genius of literature,” and the centenary of whose birth takes place this May.

Danny Morrison remembers in his teens discovering with excitement Macken’s trilogy – Seek The Fair Land (1959), The Silent People (1962) and The Scorching Wind (1964) – a literature which presented and dealt empathetically with earlier periods in the struggle for Irish freedom: namely, Cromwell’s invasion of Ireland; the Famine of the 1840s; and the Easter Rising and subsequent Tan War and Civil War.

Macken told his wife Peggy that his objective was to write the history of his people from the point of view of the ordinary man. “Before I die I want to do the history of our own people from the viewpoint of the little man, not all the big shots and the people who have done 100 things or anything like that.”

The publication of the trilogy was preceded by Macken’s earlier novels, Rain On The Wind and Bogman, and succeeded by his later works, Quench The Moon and Brown Lord Of The Mountain. Fifteen years ago when those four books were re-issued by Brandon, Danny Morrison re-read the novels and wrote this assessment of Walter Macken’s writing which he has enlarged upon for this An Phoblacht feature.

“It’s a strange thing,” says a character in The Bogman, “that nothing is more boring than eternal fertility.”

That sentiment, and a dislike for everything east of Galway City, are common themes running through four re-issued novels of Walter Macken, all of which are set in the bleak and rugged landscapes of Connemara, its interiors and shorelines.

When people hear the word ‘Connemara’, according to Stephen O’Riordan’s dying mother in Quench The Moon, “they immediately think of wild animals and pagans.” But, she argues, being uncorrupted by civilisation means “the Connemara people are still living. Everything they do is dramatic. When they love, they love unashamedly and tempestuously and in a healthy manner. When they fight, they fight with ferocity… Their whole life is a fight against something.”

But if Stephen wants to become a writer, she tells him, then he must leave, he must see the world.

(In real life Macken believed that a writer should not leave his own country, much like the Russian poet Nikolay Gumilyov who wrote, “A great poet always shares the fate of his nation, regardless of what political programme he supports.”)

Donn Donnshléibhe, on the other hand, is drawn back to the Mountain sixteen years after having walked out on his pregnant wife in 1939, hours after marrying. He has roamed the world, and fought in wars.

Donn, a powerful personality, belatedly realises that he belongs to this society and is the moving force behind bringing the people electricity, mains water, farming equipment, entertainment, and confronting the church along the way. However, he becomes disillusioned and blames the entire community when his retarded daughter, a beautiful, simple girl, is raped by a thankless youth whom he befriended and discouraged from emigrating by giving him a loan for a tractor. He becomes a slave of his own determination to exact revenge and darkens the skies over the Mountain. But, ultimately, it is the people who intervene and stop him from killing the culprit – and although grateful, Donn feels that he must leave once more.

Macken (1915-1967) often appears restless with this characters, as if he cannot decide whether his creations can survive happily in Connemara. Certainly, the more sophisticated, like Cahal Kinsella, the eponymous bogman, has to flee the mob with his maimed girlfriend, Marie Brodel, having satirised their narrow parochial ways in his songs as a release from his claustrophobic, loveless, arranged marriage to a woman twice his age. And Stephen O’Riordan, writer manqué, comes back to Killaduff to collect his bride only to discover that she had been drowned by her brother whom he then murders, before being knifed himself and left for dead by two other vengeful brothers.

Macken, however, is no Zola and these novels are no Irish equivalents of Earth or Germinal. The violence is sanitised; sex implied.

The later work, Brown Lord Of The Mountain (which with The Bogman is the most accomplished) was published in 1967, just before Macken’s death at fifty-one. It is consummately drawn, free of the quaintness and maudlinism of Quench The Moon (banned in 1948 because it describes a pregnancy outside of marriage!), which is also marred by the begorra-ism of an occasional, extremely irritating, narrative voice which slips in and out of the vernacular like Darby O’Gill on poitín.

Macken was a loyal provincialist and probably his critical reputation suffered for it. As an author, he would never be mentioned with the same reverence as Peadar O’Donnell (Donegal) or Patrick Kavanagh (Monaghan), his contemporaries who were readily admitted to the literary Pale, though he was a credited dramatist. He wrote several plays in Irish and was, for a time, a prominent actor in the Abbey Theatre (and also played a leading role in the film, The Quare Fellow). His novels were received well in America, but he is survived more by his historical trilogy, comprising Seek The Fair Land, The Silent People and The Scorching Wind, than by his other novels and plays.

The trilogy, despite the last volume’s portentous ending in tragic fratricide, is commonly taken as eulogising the cause of Irish nationalism. Certainly, it was tacitly appropriated, post-1969, into the republican canon as a populist text reflecting continuity of struggle against the traditional outside enemy. I remember buying several copies of each and passing them around my friends who devoured them, such were we in the North starved of anything literary that spoke to our political stirrings. In the early 1970s, there wasn’t a Long Kesh hut without those books – The Scorching Wind probably being the most popular.

Seán O Faoláin has observed that “there was hardly an Irish writer who was not on the side of the movement for political independence”, but that “immediately it was achieved they became critical of the nation.” A variation, I suppose, on Adorno’s “quintessential intellectual, hating all systems, on our side or theirs, with equal distaste”.

I can understand the temptation though I’ve never been entirely convinced that it isn’t a contrived stance, this utter ‘independence’. To be critical for the sake of being critical. Artists are often notoriously pompous asses. How they suffer!

Many of Macken’s characters belong to isolated communities which are alienated from the centre. Veterans of the independence war complain about being sold out socially and economically, but also that ‘the common man’ is a victim of the establishment. Their children still have to emigrate. A medical student who comes to the city notes that louts, ignoramuses and oppressors lead the country. All politicians are swindlers and thieves.

But up here the guards’ writ does not run. Macken doesn’t seem able to make up his mind about the ‘primitive ways of protection’ (summary justice) which, although demotic, is open to the abuse of being yet another ‘system’. And his characters agonise over the loss of the old ways, the old values.

Eventually, he comes down on the side of restraint; on the side of progress and modernisation. That things are changing and can change for the better: slate replacing thatch; artificial fertiliser in place of seaweed. “Someday what I’m going to do concerns Connemara,” pledges Stephen, promising to merge art and life.

Macken is also a romantic and inevitably comes down on the side of love.

Mico the fisherman, in Rain On The Wind, decides not to kill himself, not to sink his boat and deprive his family of a livelihood, and turns to the shore to find beckoning him the girl he thought didn’t love him, along with his friends and family. But Cahal Kinsella embraces exile because it means a fresh start for him and Máire.

Donn Donnshleibhe can see no solution for himself but exile, only to discover his forgiving wife, whom he thought had rejected him, is pregnant and has the solution in her suggestion that they live at the bottom of the Mountain for a change. He then realises that he came back to Ireland, to Connaught, for love: “It is the only thing left to believe in, the tie between two people.”

Macken’s storytelling is old-fashioned to our modern ear, but that is a minor complaint. Perhaps the thatch is gone for good, but when we read a Keane or the McCabes we find that out there in the sticks is the same bitchiness and ugliness and milk of human kindness that land and the wilds universally evoke in human nature.