What Is The Truth Anyway? 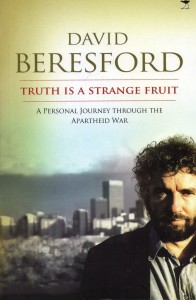 Truth Is A Strange Fruit by David Beresford is a strange but intriguing and informative book, anecdotal and episodic. The book was first published in 2010 but it was bought for me as a Christmas present just past. Beresford is, of course, the author of that classic account of the 1981 hunger strike Ten Men Dead, which has never gone out of print in twenty-seven years. The South African had been Ireland correspondent for The Guardian during the hunger strike but after he left Ireland he heard about the IRA ‘comms’ between the prisoners and the outside leadership. He was given access to these and his substantial quotes from the letters drive that unique book.

The sub-title of his new work is A Personal Journey Through The Apartheid War, quotes from cases from the TRC, the Truth And Reconciliation Commission (which neither got at the truth or led to reconciliation); is interwoven with love letters from death row by John Harris, a white anti-apartheid activist who was executed for planting a bomb at a railway station which killed an elderly woman; but also tells the story of Beresford’s struggle with Parkinson’s. Harris was the first and only white person to be executed for a political offence between 1960 and 1994 when over 2,500 people were hanged by the apartheid regime.

The TRC, from the outset poses the questions which we in Ireland all are too familiar with, if unable to agree about: What is the truth anyway? Can anyone claim to ‘know’ it? It came up with several different kinds of truth. There was ‘factual’, or ‘forensic’ truth; ‘personal’ and ‘narrative’ truth; ‘social…truth’; and ‘healing and restorative truth’.

That part of the book which deals with the ANC’s brutality against its own members, when paranoia about infiltration was rife in the training camps of Angola (a ‘plot’ to poison 500 cadres was allegedly discovered), makes extremely uncomfortable and disturbing reading. “34 cadres were executed ‘by order of our military tribunal’ in Angola, while 41 committed suicide.” That story along with the daily killings in the townships, the routine torture of prisoners (including the disappearance, dismembering and secret burying by the police and farmers of seventy ANC suspects), individual accounts of the deaths of white farmers and their families, and the necklacing of suspected informers, are reminders of the cruelties and injustices which are endemic to all freedom struggles. And, indeed, all conflicts.

Beresford tells the story of Barend Hendrik Strydom, the mass murderer who in 1988 shot 22 black people, killing seven of them. “Each black person threatens the continued existence of whites, even an 88-year-old woman,” he said, referring to an 88-year-old hawker who was among his victims. “Scientists have shown that the oxygen is decreasing. This is the fault of blacks. They are threatening the life of the entire planet.” Evidence to the court was that, when parking his car prior to the massacre, Strydom put money into the parking meter. “He was, after all,” remarks Beresford, “a law-abiding man.”

Stryder was given early release under the amnesty ‘forgiveness’ conditions in 1992 and Beresford poses the question, “What is a political prisoner?” Mandela and De Klerk failed to agree on a definition. Mandela is said to have agreed to Strydom’s freedom (because he wanted ANC prisoners also amnestied) but De Klerk, presumably still hanging on to faux moral supremacy, opposed his release!

The few of those, out of many, in the police hit squads who were exposed as killers on behalf of the state claimed ‘political motivation’. “All, or most,” says Beresford, “have benefitted from the political trade-offs that have taken place behind closed doors in the name of national reconciliation,” though Beresford questions the morality of the process.

These are the same dilemmas facing our community in the North. The victims want to know ‘the truth’ and full admissions and in some cases prosecutions. All the protagonists, while wanting the whole truth from their enemy, have enough muscle (loyalty/kinship in one form or another; on the British side, the exercise of blocking laws) to prevent the whole truth of their responsibility and accountability from emerging. The protagonists (but particularly the British, in my opinion) will not ‘open their books’, so to speak, so I doubt whether any truth and reconciliation commission would work here.

However, Truth Is A Strange Fruit, despite its darkness and despair is also relieved with humour – a particular example being Nelson Mandela’s letter to Comrade Walter Sisulu, c/o The Pearly Gates, The Entrance to Heaven, just after he receives news of Sisulu’s death. Mandela tells Walter about the weeping and wailing for him down on earth but that Mandela, who is not crying, is telliing everybody that Walter has “merely gone ahead to do some organizing for the ANC.

“Basically, it appears that people just cannot understand the strength of a friendship like ours. I mean a friendship that can survive your introduction of me to Winnie is not going to have any trouble in coming to terms with death…

“…when He [God] decided to make man in His own image, does that mean he looks like FW or Thabo? Why did He unleash PW Botha on the world? Not to mention Hendrik Verwoerd, JG Strijdom and John Vorster?”

“What did Winnie do with the money?

“Do you have any insight, from where you are, as to when Robert Mugabe plans to come out of the cupboard and what will he be wearing for the occasion?”

“When I look back, over that long road to freedom that we trod together, I realize that our story is anyway a never-ending one. It is a story that will not end with the death of you, or me, but will be handed on from generation to generation. The story of how two young men, one an estate agent and the other a lawyer, destroyed one nation and replaced it with another, much fairer one.”

“Hambe kahle, Walter. You can go with pride.