Where Are They Now?! 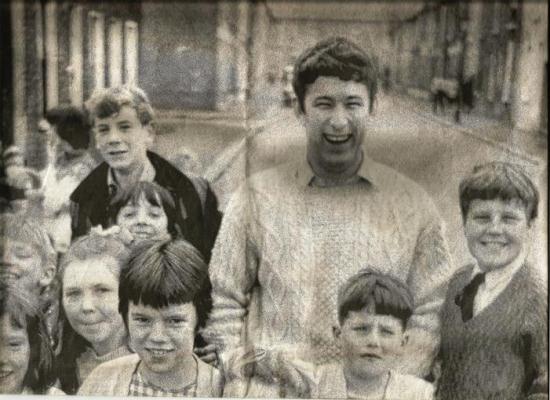 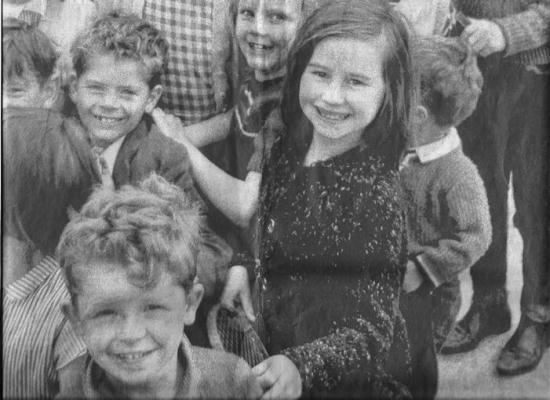 On 8th March, the weekend section of the Irish Times devoted a full broadsheet page to an astonishing photograph showing a backstreet Belfast scene from the early 1960s of a young, smiling Seamus Heaney, in an Aran sweater, surrounded by about fifteen joyous kids, at a time when he was teaching in Belfast.

The photograph was taken for a Vogue magazine article by Heaney’s future sister-in-law, the author Polly Devlin, and probably the first person ever to interview Heaney.

The Irish Times caption reads: “This rarely seen photograph was taken for a Vogue article on Belfast by Heaney’s sister-in-law Polly Devlin. It shows Heaney in 1962, when he was 23 and teaching at St Thomas’s Secondary Intermediate School, in Ballymurphy.”

Copyright for the photograph resides with the old publishing house Condé Nast Publications in New York.

I thought it would be an easy task to find out the identities of the children and whatever happened to them and whether they knew they had once been photographed with the future Nobel Laureate Winner. But I was wrong.

I tried to identify the district where the photograph was taken and I brought it around to various areas asking people if they could recognise an old school friend (all of the kids in the photograph would now be sixty or more) or the street in question. The photograph was certainly not taken in Ballymurphy or the Whiterock, the vicinity of St Thomas’s, because the houses in those two areas have small front gardens and the background of the Heaney picture is of old terrace houses.

I went down to the Falls, up to the Clonard area, down to the Markets and over to the Ormeau Road area where between 1961-1963 Heaney lived in flats in Wellington Park and Fitzroy Avenue. Of course, I was assuming it was taken in a nationalist area and I might be entirely wrong about this. Gerard Rice, who runs the Shaftesbury Community and Recreation Centre, told me that this part of the Ormeau area back in the 1960s was a fairly mixed area but even he drew a blank with the older citizens.

I went to bars and clubs frequented by pensioners to see if any of the clientele could recognise someone in the picture which would then put me on the scent of others – but again nothing. The photo was copied and put up on the wall of my doctor’s surgery and posted on various websites.

There were many who thought they recognised this or that person but nothing checked out and so it remains a mystery. Someone suggested Cairns Street, off Leeson Street, but then that was dismissed. Another person thought it was Boundary Street, off Divis Street. With redevelopment in the early 1970s the topography of much of old Belfast has been changed beyond recognition, making identification even more difficult.

One old boy in the Falls, who grew up in the Pound Loney, joked, “it’s definitely not us. Look how well dressed that kid is on the right. And there’s a wee girl with a tennis racket! When did we ever have a tennis racket? They all look too well fed!”

I contacted Polly Devlin, who as a young journalist was one of the first to spot Seamus Heaney’s talent. In the 1960s Polly had also interviewed Bob Dylan, John Lennon, and Janis Joplin, and worked with photographers David Bailey, Richard Avedon, Norman Parkinson, Irving Penn and Lord Snowdon.

“I commissioned the picture and can’t even remember who I commissioned to take it! Boundary Street sounds right in poetic terms and in terms of Seamus’s sense of fun and irony. It’s a heartbreaking and joyous picture at the same time. Good luck with your search – I’m sure you’ll unravel it!”

I also contacted Seamus Heaney’s widow, Maire, whom I had met before. She thought that Seamus probably made his own arrangements with the photographer. But she also introduced an intriguing possibility.

Maire said, “I’m pretty sure the photo was taken in 1965 and not in 1962, as stated, and he would no longer have been teaching in St Thomas’s but was lecturing in St Joseph’s Training College, Trench House, by then. I hope this is of some help and that the project, which would be most interesting and revealing, is successful.”

So, the photograph might be misdated by two or three years, which I am beginning to suspect – because I read somewhere that Polly didn’t begin full-time with Vogue until 1964. If it was taken in 1965 this should have made the chances of resolving the question marginally better but hasn’t!

Does anyone know any of these children and where they are now?